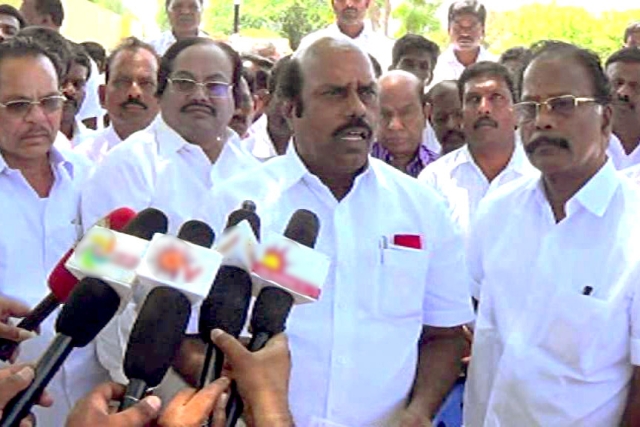 E V Velu, a former minister in Dravida Munnetra Kazhagam (DMK) government, led a group of his party cadres signing bhajans at the memorial of late leader and former Tamil Nadu Chief Minister M Karunanidhi on Marina beach. The singing of bhajans and various other acts of the DMK, which claims to be an atheist party, has drawn criticism from various quarters. Pattali Makkal Katchi (PMK) founder S Ramadoss has called the DMK a Bhajanai Munnetra Kazhagam (a party developing bhajans).

Media reports said that the DMK cadres claimed to have sung songs in bhajan style in praise of the late leader, who died on 7 August this year after a brief hospitalisation.

Earlier, noted Tamil poet Vairamuthu, who hit the headlines for his comments against Aandal - one of the 12 Alwars who followed the Vaishnava tradition - had sprinkled milk on the memorial.

Photographs of the late leader’s family observing the tenth day after his death also did rounds on social media during the weekend.

DMK leaders, barring a few like the late P T R Palanivel Rajan, have seldom been seen sporting any religious mark in public. In the run up to the 2016 Tamil Nadu Assembly elections, DMK Working President and Karunanidhi’s son M K Stalin visited temples. His family, especially his wife Durga, has been seen visiting temples.