DMK To Contest In 20 Of Tamil Nadu’s 39 LS Seats, Allocates Bulk Of Constituencies In Kongu Belt To Its Allies 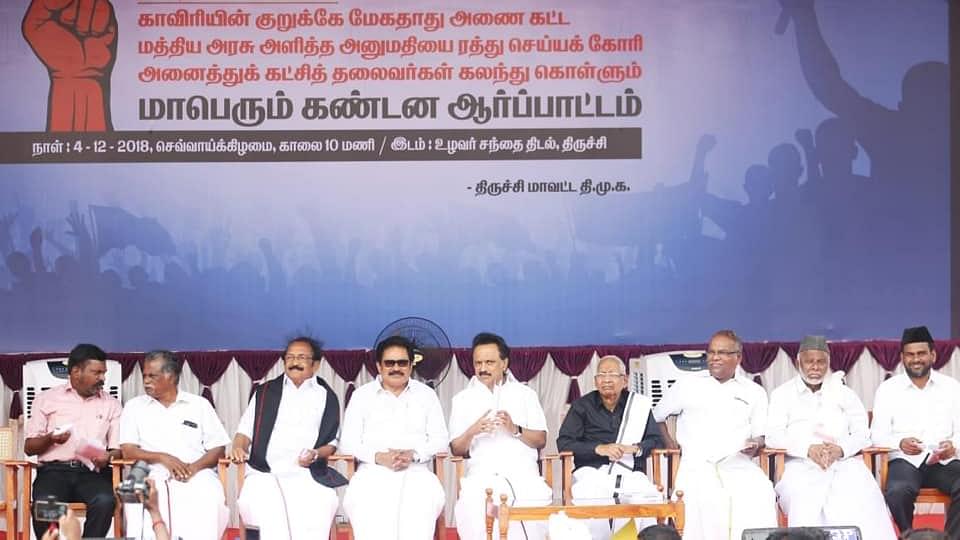 Tamil Nadu’s principal opposition party Dravida Munetra Kazhagam (DMK) today (Mar 15) announced the names of the constituencies the party and its allies will contest from in Tamil Nadu and Puducherry in the April 18 Lok Sabha elections.

Stalin released the list of constituencies allotted to the allies in the presence of coalition leaders, including the newly appointed TNCC chief KS Alagiri and MDMK’s Vaiko, at the party headquarters here.

“DMK along with its friendly parties have been raising together for several issues in the State for the past few years and we are happy that we have come to form an alliance now,” he said.

The Indian Union Muslim League (IUML) and Kongu Makkal Desiya Katchi (KMDK) will contest from Ramanathapuram and Namakkal, respectively, while the Pachamuthu led IJK has been allotted Perambalur.

Stalin added that the candidates for the by-elections will also be announced along with the Lok Sabha candidate list. Contrary to speculations, Stalin asserted that MDMK will be given a Rajya Sabha seat.

“The election manifesto of DMK is getting ready and is in its final stages. It will be formally released in four to five days,” he said. Leaders of the alliance parties were also present on the occasion.

Soon after Stalin announced the constituencies list today, CPM announced its candidates for Madurai and Coimbatore seats. Former MP P.R Natarajan will be contesting from Coimbatore and noted Tamil writer S. Venkatesan will be party’s Madurai candidate. Venkatesan’s Kavalkottam, published in 2008, was awarded the Sahitya Akademi Award for Tamil in 2011. He is the general secretary of the Tamil Nadu Progressive Writers and Artists Association.