Don’t Want To Be A Part Of Shabana Azmi’s Politics: Kangana Ranaut 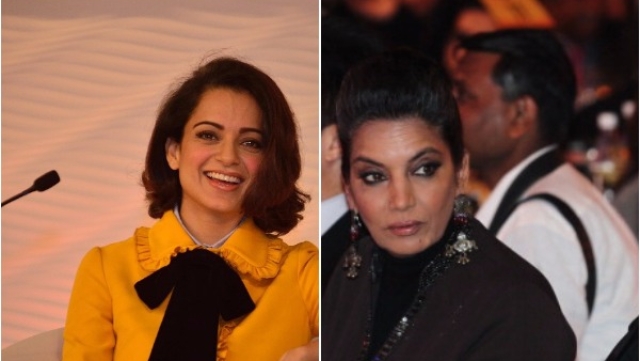 Kangana Ranaut has said that she will not lend her support to a letter campaign, in support of the movie Padmavati, which is being led by Shabana Azmi. She also claimed that Shabana Azmi had “character assassinated” her earlier when she was getting bullied in the film industry.

Ranaut said that while she supports Deepika Padukone in her individual capacity, she would like to steer clear of the Azmi’s "investment in left wing versus right wing politics".

Azmi had started a letter campaign supposedly with the aim of supporting Padukone against the death threats she had received from fringe groups. However, Azmi is getting censured for using the campaign to target the ruling dispensation in the country instead.

#Padmavatis application to CBFC has been sent back bcoz of incomplete formalities! Really? Or to keep fires stoked for electoral gains?

Sabki dukaan chal rahi hai under the patronage not of the fringe but of the Govt in power. Filmindustry must stand as 1 with #Padmavati

Veteran filmmaker Madhur Bhandarkar, who received similar threats while releasing his movie, Indu Sarkaar, has called out Azmi’s hypocrisy on the issue too. Bhandarkar had not received much support from the film industry back then. The best guess for why this happened is that his movie was critical of the Congress.

@AzmiShabana ji I am equally concerned about threats to @deepikapadukone and SLB over #Padmavati however I feel sad about your biased approach. I would have appreciated similar support from you when I was being violently threatned by Congress workers over my film #InduSarkar

At least two conclusions can be drawn from Ranaut’s statement. One, not everyone in the film industry thinks that what Shabana Azmi does is pure activism. While Ranaut may be the only one who has spoken, the belief that Azmi disguises her politics in the garb of activism may be widespread in the Hindi film industry. Second, that this politics is always in the favour of the Leftist ecosystem, and against all others, is a truth that appears to have finally dawned on at least some who work in Hindi cinema.

Azmi’s husband, Javed Akhtar was criticised over his selective condemnation of fringe groups too.

Now, with Ranaut’s stance, can it be said that the hypocrisy of Azmi and likes is finally being called out from within the industry?