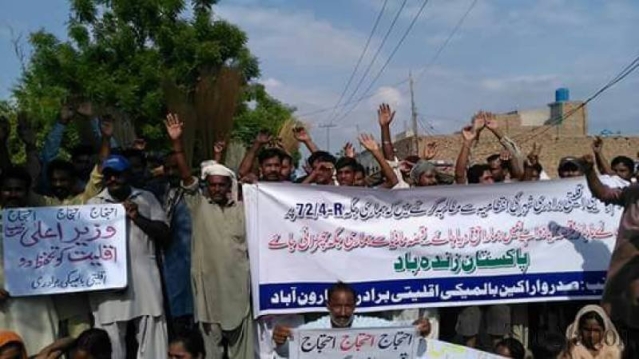 The minority Hindu community in Pakistan, it seems, continues to face discrimination, prejudice and intolerance. Dozens of Hindu families living in Haroonabad area of Bahawalnagar district in Pakistan's Punjab province have been asked by local government authorities to vacate their homes.

According to a report in The Nation, a notification was forwarded to residents of Chak 72/4R, asking them to vacate their homes immediately.

"You people have been living here at Jarnali Sarak (The Grand Trunk Road) illegally for a long time and it has been notified on June 13, 2017 that these houses will be vacated because you are illegal occupants of this property," The Nation quoted the notification, as saying. "In other case the government property will be vacated with government's force," the notification further said.

It is alleged that this coercive removal of Hindus is being done under pressure from the owners of a housing scheme who want to build the front gate by demolishing the houses of Hindus, living there for the last three decades.

Society of Hindu Balmiki Mandar (SHBM) president (Haroonabad) Harbans Lal Sultani said 69 Hindu families have been living on government designated land called 'Jurnaili Murabba' since 1987 on the written orders of the then Bahawalnagar commissioner. He added that allotment of five marlas to each Hindu family was completed when the Pakistan People's Party was in power 1995.