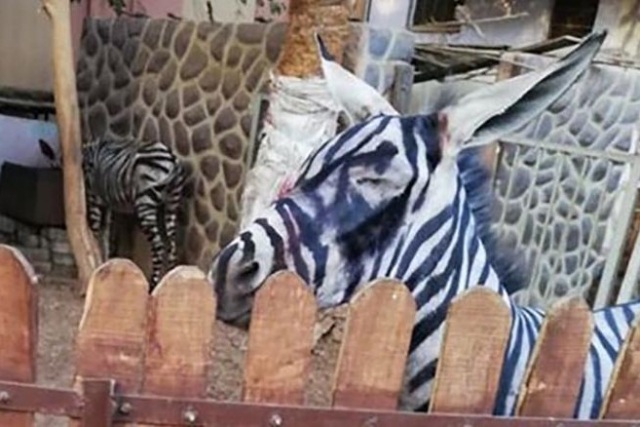 In 2013, a zoo in the city of Louhe in the Henan province of China managed to kick up a storm when one of the animals in the cage – listed as an African Lion – was barking. It soon emerged that the animal was not really a lion but a Tibetan Mastiff, a large dog with hair that the authorities tried to pass off as a lion.

Five years later, the story is set to repeat itself, this time in Egypt. According to a CNN report, a zoo in Cairo has been accused of painting stripes on a donkey to pass it off as a zebra. Referring to the incident as similar to that of a “wolf in sheep’s clothing”, the report adds that the zoo’s director claims that the animal is indeed a Zebra and not a Donkey.

The anomaly came to light when 18 year-old Mahmoud Sarhan paid a visit to the zoo and found the strange-looking beast which he photographed and uploaded to Facebook. The post went viral and it became clear that the paint was melting off the animal’s face its ears were not quite what they should have been.

The stupidity has reached in the country that they brought a local donkey and painted it to look like a zebra.

The caption that Sarhan put along with his image in Arabic

However, Mohammed Sultan, director of Cairo’s Gardens Project told a local TV channel Youm 7 News that the animal was indeed an equus hippotigris and not an equus asinus.

The incident has raised a bit of a public outcry with animal rights group asserting that the animal has been subjected to cruelty and are demanding that the city’s authorities investigate the matter.