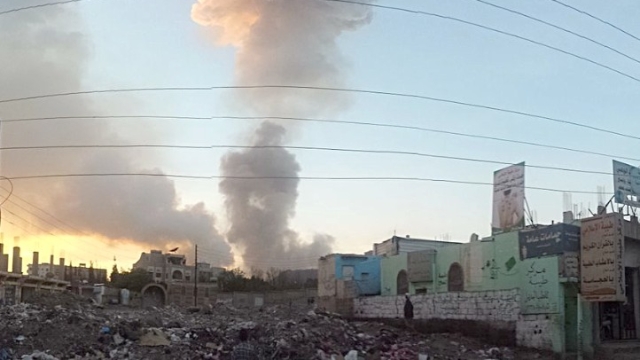 An airstrike by a Saudi Arabia led coalition in northern Yemen has led to the death of at least 29 children, says a report in New Indian Express.

As per the report, this attack on Thursday (9 August) targeted a bus in the Dahyan market of Saada, which is considered to be a stronghold of Houthi rebels. The bus carrying the children was hit when the driver had briefly stopped for refreshments. The kids were said to be returning to school from a picnic.

According to a statement from Red Cross, a hospital supported by the organisation received bodies 29 children aged below 15. Forty-eight people are said to be injured in the strike including 30 children.

A Houthi controlled television network claimed that a total of 50 people were killed and 77 injured, believed to be mostly children.

The spokesperson of Saudi Arabia led coalition - Turki al-Maliki defended the airstrike by alleging that there were no children in the bus, which as per him was instead carrying Houthi soldiers. The coalition has also claimed that the airstrike was a legitimate military action following a Houthi airstrike on Saudi Arabia this Wednesday (8 August).

Saudi Arabia has since then banished the Canadian ambassador and is contemplating pulling out students and medical professionals from the country.