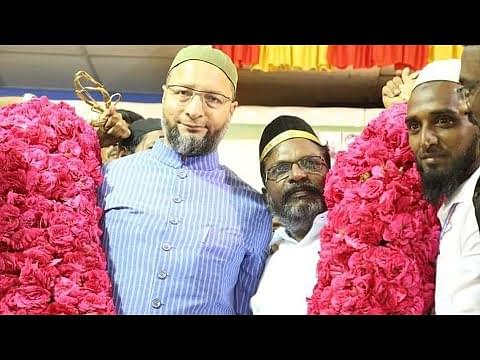 Contradicting earlier reports, DMK has denied that it has invited firebrand Islamic leader Asaduddin Owaisi of All India Majlis-e-Ittehadul Muslimeen (AIMIM) to attend a meeting organised by the party’s minority wing on January 6 in Chennai.

DMK said that only leaders of alliance parties have been invited.

Reports had emerged earlier that DMK has extended an invitation to AIMIM chief Asaduddin Owaisi for a meeting organised by the party's minority wing.

According to several reports in media, DMK’s minorities welfare wing secretary Dr. D Masthan along with AIMIM’s state president Vakkil Ahamed went to Hyderabad on Friday (Jan 1) to invite Owaisi for the meeting in Chennai. The invitation fuelled speculation that the DMK and AIMIM would come together to contest this year’s Assembly election.

The New Indian Express quoted Vakkil Ahamed confirming that Owaisi was invited for the meeting.

Basking in its recent electoral success in Bihar, AIMIM has set its sights on Tamil Nadu and plans to contest in the assembly elections this year.

AIMIM is planning to field candidates in atleast 25 seats in the assembly elections. The party is also planning to tie-up with actor-turned-politician Kamal Haasan’s outfit Makkal Needhi Maiam.

Owaisi is also said to have mooted a proposal to tie-up with DMK led front but he is yet to get any positive response from the alliance.

According to 2011 census, Muslims form 5.86 per cent of the population but latest estimates suggest that it may have risen now to nearly 7% with more than 50 lakh Muslims in the state. Districts like Vellore, Ranipet, Tirupattur, Krishnagiri, Ramanathapuram, Pudukottai, Trichy, Madurai and Tirunelveli have a substantial number of Muslims in their population.