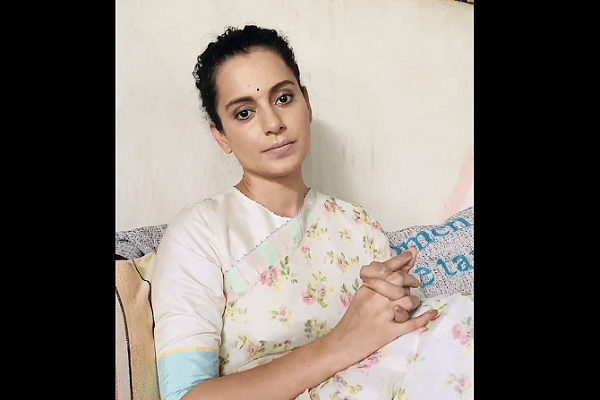 After getting support from a saint in Ayodhya, it is now the Akhil Bharatiya Akhara Parishad (ABAP) -- the apex decision-making body of the 13 recognised Hindu monastic orders in the country -- that has come out in support of Bollywood actor Kangana Ranaut.

Akhara Parishad president Mahant Narendra Giri has described Kangana Ranaut as a 'brave and courageous daughter' of the nation who has busted the racket of the drug mafia and its links with Bollywood.

"The fearless voice of the actress against the domination of a particular community in Bollywood and drug mafia has caused ripples. This has scared the drug mafia while the state government is feeling threatened of being uprooted," said Giri.

"This is the reason why the Uddhav Thackeray government has demolished Kangana Ranaut's office to intimidate her," he stated.

The Mahant further said, "The Maharashtra High Court has given relief to Kangana by ordering a stay on demolition. The bravery with which she has faced the drug and Bollywood mafia in Sushant Singh murder case, has made many people angry and they are targeting her."

He thanked the Himachal Pradesh government and the Centre for providing a security cover to the actress.

"The law and order situation in Maharashtra is very bad. The Maharashtra government has not taken any action in the case of mob lynching of two saints in Palghar. The Akhara Parishad demanded a CBI inquiry in the Palghar case, but the state government has failed to act," he added.

Replying to a question, the ABAP also condemned the fraudulent withdrawal of money from the account of Shri Ram Janmabhoomi Teerth Kshetra Trust.

The ABAP president demanded stern action against the culprits. He said the incident must be investigated properly and any link of bank employees should also be probed.