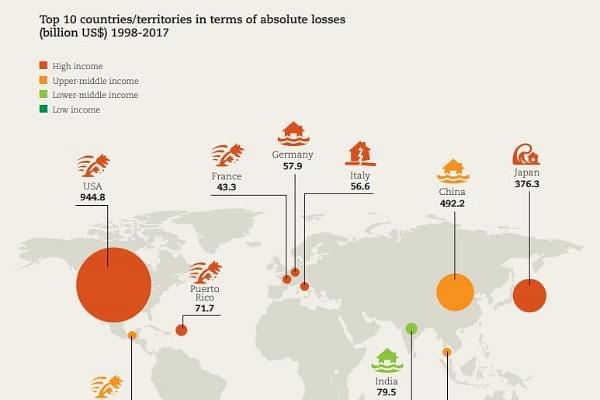 The UNISDR report captured the losses in various countries due to natural disasters (From UN Report : Economic Losses, Poverty and Disasters 1998-2017 )

According to a recent report by the United Nations Office For Disaster Risk Reduction (UNISDR), India faced a loss of $80 billion due to natural disasters between 1997-2018, Times of India has reported.

The impact of natural disasters on lower middle income countries like India has been the highest according to the report titled, “Economic Losses, Poverty and Disasters 1998-2017”. India has been ranked among top five countries in terms of absolute economic losses by the report. Global economic losses due to natural disasters have been pegged at $ 3 trillion.

The study was conducted by UNISDR and Centre for Research on the Epidemiology of Disasters (CRED) It was released before International Day for Disaster Risk Reduction (13 October). The report points to the fact that developing countries will face huge challenges in coming years because of natural disasters.