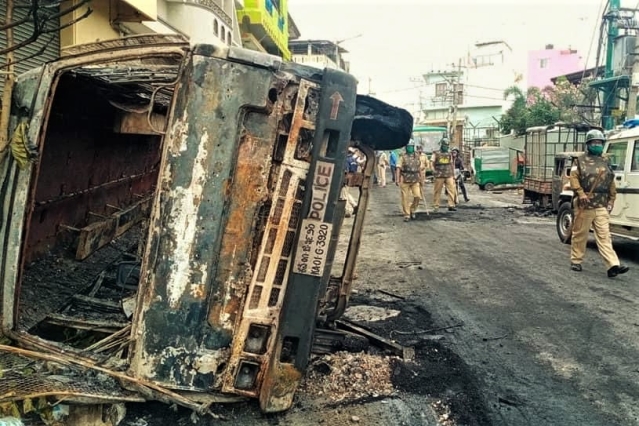 Days after violence in Bengaluru over an alleged defamatory post on social media, a bounty of Rs 51 lakh was announced by UP's Meerut-based Muslim leader Shahzeb Rizvi on the head of Naveen, the relative of Karnataka Congress' Dalit MLA R Akhanda Srinivas Muthy, for posting the 'blasphemous' content.

Rizvi released a video where he is seen condemning the comments on Prophet Mohammad by Naveen on Facebook and announcing a cash reward of Rs 51 lakh for “anyone who brings the head of” Naveen.

Rizvi also asked members of the Muslim community to contribute money for the bounty.

Rizvi is a resident of Rasulpur village under Phalauda police station in Meerut. He was earlier a member of the Samajwadi party but at present he is not associated with the party, as per reports.

According to the reports, after the video went viral on social media, Meerut SSP Ajay Sahni took cognizance of the video and ordered a probe into the matter.

A case was registered late night on 13 August by the Meerut police at Phalauda police station. Rizvi has been booked under IPC sections 153 (A) and 505 (2).

Read the contents of the FIR below:

FIR filed under sections 153-A and 505(2) against Shaheen Rizvi in Meerut, who announced a Rs 51 lakh bounty on Bengaluru resident Naveenâs head. pic.twitter.com/HpLSlyVhUQ

Ealier on Tuesday (11 August), violence erupted in Bengaluru over the alleged defamatory post by Naveen. Three people were killed after police opened fire to control the unruly mob.

At least 110 persons accused of arson, stone-pelting and assault on the police were arrested in connection with the violence.

Karnataka Home Minister Basavaraj Bommai on Thursday (13 August) said that the Islamic radicals were behind the Bengaluru riots and an investigation will be done on whether it was the part of a larger conspiracy.