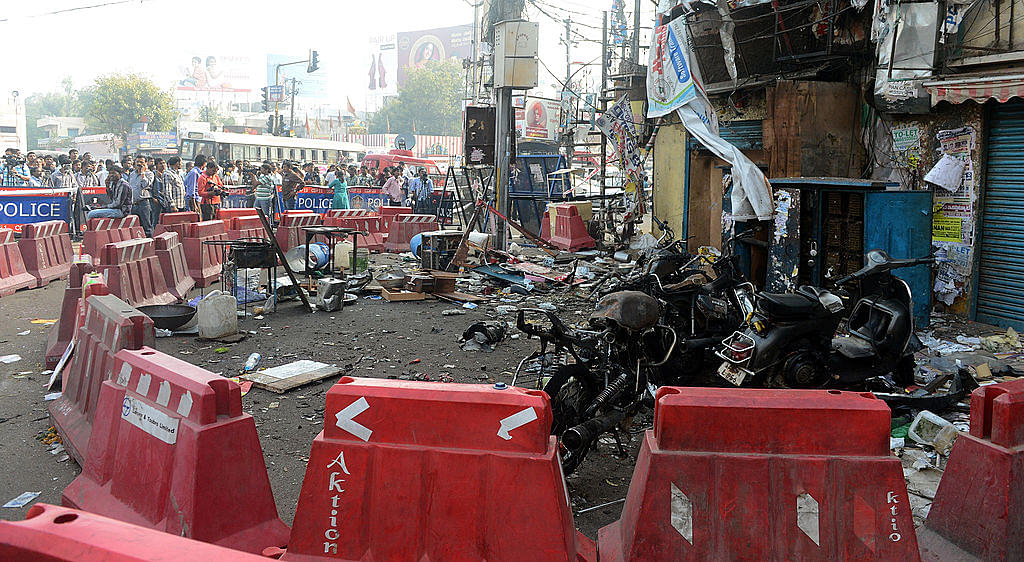 The site of the bomb blast at Dilsukh Nagar in Hyderabad on February 23, 2013. (INDRANIL MUKHERJEE/AFP/Getty Images)

A special court on Tuesday (13 December) held five operatives of banned Indian Mujahideen including a Pakistani national guilty in the 2013 twin bomb blasts case. Pronouncing the judgement, the National Investigation Agency (NIA) special court fixed 19 December for announcing the quantum of punishment. Those found guilty include one of the IM's founders, Yasin Bhatkal alias Ahmed Siddibappa Zaraar, brother of Riyaz Bhatkal, the brain behind the blasts.

Riyaz, a resident of Karnataka's Bhatkal town, is suspected to be hiding in Pakistan and NIA has already issued Interpol Red Corner notice for him. Zia ur Rehman alias Waqas, a resident of Mustafabad of Pakistan's Punjab province is among the convicted. Others found guilty are Asadullah Akhtar alias Haddi of Uttar Pradesh, Tahseen Akhtar alias Monu of Bihar, and Aizaz Saeed Shaik alias Aijaz Shaikh of Maharashtra.

The twin blasts in Dilsukhnagar area in Hyderabad on February 21, 2013, killed 18 persons, including one unborn child in mother's womb, and injured 131 others. The NIA, which probed the case, arrested Bhatkal and Asadullah Akhtar from India-Nepal border in August 2013. Tahseen Akhtar and Rehman were arrested by Delhi Police from Rajasthan in March 2014. Shaikh was arrested subsequently.