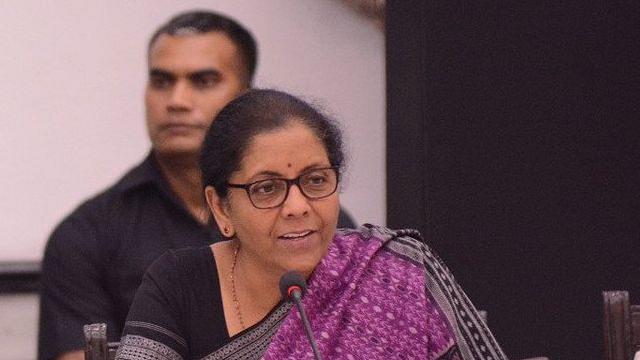 Union Finance Minister (FM) Nirmala Sitharaman will address a press conference at 2.30 pm today (14 September) at the National Media Centre in New Delhi. This will be her third in the past few days in which she is expected to unveil the next set of measures to address the ongoing economic slowdown.

The Ministry of Finance had earlier confirmed that the FM would address the media on Saturday.

FM Sitharaman is expected to make announcements focusing upon boosting the realty and export sectors. She is likely to announce sector-specific solutions as well as broad-based relief measures.

On 23 August, FM Sitharaman had addressed her first presser, announcing steps like the rollback of surcharge on foreign portfolio investors,  frontload the Rs 70,000 crore recapitalisation of banks to enable public sector banks to lend another Rs 5 lakh crore and lower rates, measures to revive the auto slowdown, among others.  She had also announced that micro, small and medium enterprises will receive refunds on their GST payments within 30 days.

The FM also reiterated her to promise to withdraw the angel tax on start-up promoters and investors thus re-emphasising that the taxman will not act arbitrarily on this front. The Central Board of Direct Taxes (CBDT) followed up the announcement notifying the creation of a five-member special cell to address grievances of startups associated with angel tax and other tax-related issues.

The first of the clusters will be headed by Punjab National Bank, with Oriental Bank of Commerce and United Bank of India being merged in it. To give it scope for credit growth, this cluster will get additional capital of Rs 17,000 crore. After the merger, this will be the country’s second-largest bank after State Bank of India. The merged entity will have a strong presence in northern and eastern India and will have net non-performing assets (NPAs) of 6.61 per cent after the merger.

The next cluster will involve two southern banks, with Canara Bank swallowing Syndicate Bank. It will become number 4 in the national pecking order. The cluster will get Rs 6,500 crore in extra capital and after the merger will have net NPAs of 5.62 per cent.

The third cluster will have Union Bank at the helm, with Andhra Bank and Corporation Bank being merged with it. The bank, which will have a strong western and southern footprint, will get an additional dollop of Rs 11,700 crore in extra capital. Net NPAs after merger be 6.3 per cent.

The last cluster involves a north-south combo, with strong Indian Bank taking over Allahabad Bank. It will get Rs 2,500 crore in new capital since its merged net NPAs will be a low 4.39 per cent. In terms of cultural challenges, this merger may be the toughest to pull off.

After these mergers are operationalised, six nationalised banks will remain separate - Bank of India, Central Bank of India, Indian Overseas Bank, UCO Bank, Punjab and Sind Bank and Bank of Maharashtra. The first two have a national footprint, but the remaining four have largely regional franchises. Quite clearly, one cannot presume that these banks will remain standalone forever. At some opportune moment, more mergers cannot be ruled out.