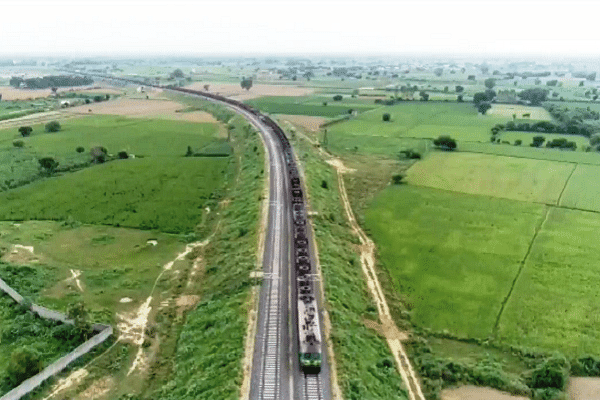 On Saturday(29 May), goods trains on the Eastern dedicated freight corridor (EDFC) recorded a speed of 99.38 kmph.

Freight trains are running at speeds faster than Rajdhani trains, officials said as per a report in Moneycontrol.

Three trains ran at an average speed of more than 99 kmph, the fastest speed on the 331-km long New Khurja-New Bhaupur section of the (EDFC), which was inaugurated for operations by Prime Minister Narendra Modi on 29 December 2020.

The 306 km section between Rewari and Madar on the Western Dedicated Freight Corridor (WDFC) was opened on 7 January. To date, 3000 trains have journeyed on EDFC, while 1000 have travelled on WDFC.

"Some of the trains in the section are achieving a speed of 90 kmph routinely. Today three trains crossed the 99 kmph milestone while one achieved the speed of 99.38 kmph in EDFC. In WDFC the average is 89.50 kmph. These speeds are comparable to any of the fastest mail express trains," the official added.

This speed is faster than the Rajdhani trains, which average around 80 kmph on the rail network.

On 29 May, an empty train on its way to load coal timed 99.38 kmph, completing its journey of 351 km in three hours and twenty minutes.

Officials stated that the high speeds on the DFCs are essentially due to the lack of restrictions on the DFCs that are common on the network of Indian Railways.

Normally network is so full that time loss of up to 10 minutes per 100 km is common.

Another reason is that the curves are not more than 2.5 degrees, which helps achieve a speed of 100 kmph.

Approximately 2,800 route km of the whole WDFC and EDFC (excluding the Sonnagar-Dankuni PPP section) is expected to be commissioned by June 2022.