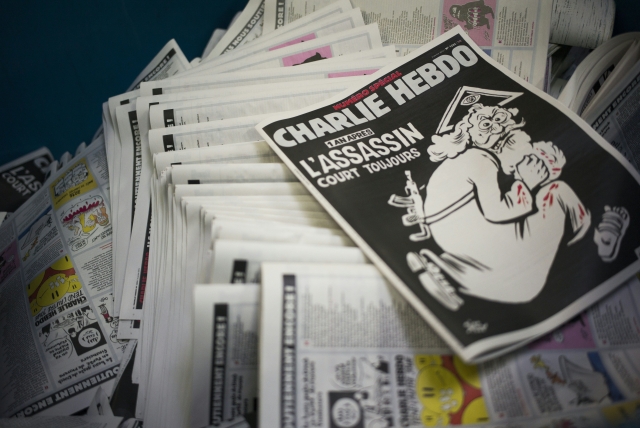 French satirical weekly Charlie Hebdo is reprinting its cartoons of Mohammed, regarded as Prophet by members of Muslim community, to mark the start of a trial over the 2015 Islamist terror attack at the paper's offices, news agency AFP reported

'We will never lie down. We will never give up,' Charlie Hebdo director Laurent Sourisseau wrote in an editorial to go with the cartoons today.

The trial of 14 perpetrators, who are charged with various crimes including supplying weapons, membership of a terrorist organisation and financing terrorism, is set to begin in Paris tomorrow.

Twelve people including some of France's most celebrated cartoonists were killed in the Charlie Hebdo attack on January 7, 2015, when Said and Cherif Kouachi went on a gun rampage at the paper's offices.

As they fled the office, the terrorists were heard shouting 'We have killed Charlie Hebdo. We have taken revenge for the sake of the Prophet Mohammed.'

The cover of the latest Charlie Hebdo issue shows a dozen cartoons first published by the Danish daily Jyllands-Posten in 2005 -- and then reprinted by Charlie Hebdo in 2006.

In the centre of the cover is a cartoon of the prophet drawn by its cartoonist Jean Cabut, known as Cabu, who lost his life in the massacre.

Even as France was mourning the death of Charlie Hebdo employees, the attacks continued the next day when Amedy Coulibaly, an acquaintance of Cherif Kouachi, killed a female police officer, Clarissa Jean-Philippe.  Coulibaly also killed four Jewish men at a kosher supermarket in eastern Paris after taking hostages and demanding that the Kouachi brothers go free.

In a video recording, Coulibaly said the attacks were co-ordinated and carried out in the name of Islamic State.