GDP Growth Beats Expectations: Economy Grows At 7.7 Per Cent In Q4 Of FY18 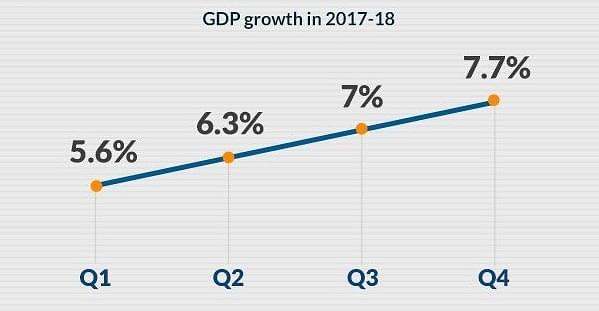 vGrowth rate through the quarters in FY18. (pic via amitmalviya/Twitter)

India’s GDP growth for the quarter ending March has beaten all expectations, with the economy growing at a robust 7.7 per cent for the last quarter of FY18.

This is much higher than China’s GDP growth of 6.8 per cent for the same quarter with the Indian economy hence retaining the ‘fastest growing large economy’ tag for two second subsequent quarters.

The growth has reportedly beaten industry expectations with a Bloomberg survey of 38 economists predicting a rate of 7.4 per cent for the quarter.

GDP growth has been increasing continuously every quarter with growth of 7.7% in Q4 of 2017-18. Shows that the economy is on the right track & set for even higher growth in the future. This is the #SahiVikas under leadership of PM @NarendraModi ji & @ArunJaitley ji

With the numbers for the last quarter in place, the full year growth now stands at 6.7 per cent, lower than the previous year’s 7.1 per cent. The lower rate is attributed to Q1 and Q2 growth rates that were affected by teething troubles for the GST regime and after-effects of demonetisation.

However, the high growth rates indicate that the troubles might be over in what would be excellent news for Prime Minister Narendra Modi as the country goes to polls in 2019.

The rapid growth in manufacturing sector at 9.1 per cent and in the construction sector at 11.5 per cent are being attributed for the high growth overall.