Going Beyond The Call Of Duty: Indian Peacekeepers In South Sudan Earn Plaudits 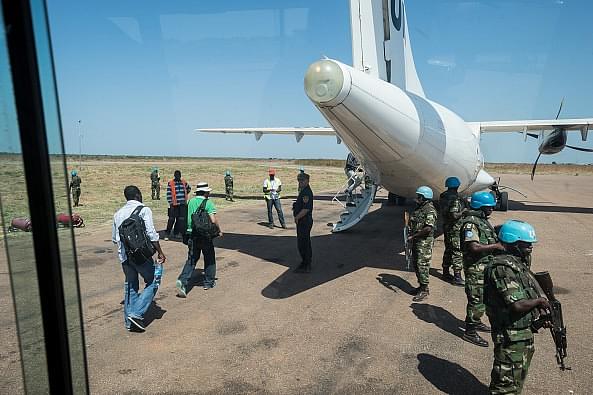 Indian peacekeepers serving in South Sudan have earned deserved appreciation for their role in repairing and servicing a runway at the Malakal Airport. The Indian forces went beyond their regular scope of duty in ensuring that the runway at the Malakal Airport was functional as South Sudan relies heavily on air connectivity due to the shambolic condition of their road infrastructure.

The airport runway had been shut since 2013 and was heavily damaged with huge craters on the runway and tall bushes around its peripheries. The challenge to restore the runway was compounded by the fact that work had to be scheduled around the arrival and departure of airborne objects from an adjoining airstrip. A combination of the above factors resulted in the peacekeeping forces spending many evenings and weekends at the airport thus going beyond the call of duty.

Malakal airport manager David Garang Mangok while lauding the efforts of the peacekeepers said “I’d like to commend their good quality of work, support and cooperation”.

This effort of the Indian peacekeepers comes on the heels of the efforts made by an Indian engineering team in repairing an important service road to Melut. It has been noted that these efforts by Indian forces in improving the infrastructure in South Sudan would pave the way for the growth of business and lead to better economic prospects for the citizens of the beleaguered nation.