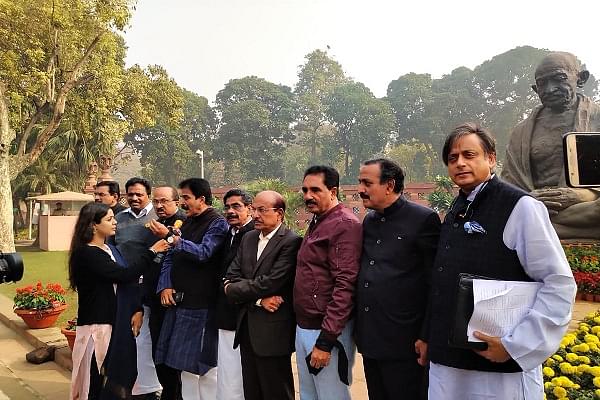 Shashi Tharoor and other Congress leaders protest outside the Parliament. (@ShashiTharoor/Twitter)

Amidst violent protests that broke out in Kerala after two women of childbearing age violated religious norms by entering the Sabarimala temple, the Congress party has now come out in support of devotees, moving adjournment notices on the issue and protesting the incident at the parliament, reports The Tribune.

Congress MPs belonging to Kerala, including senior leaders such as KV Thomas and Shashi Tharoor, came out in protest outside the parliament building against women’s entry to the shrine, stating that the communist government of the state sponsored the occurrence.

“We are observing a black day in Kerala. The CPM government in Kerala is challenging the sentiments of Sabarimala devotees. The two young women who entered the temple did so with the sponsorship of the state government. These women are activists. They are Maoists,” Congress MP from Mavelikkara K Suresh remarked.

The Congress MPs had moved their protest outside after the parliamentary session was suspended due to disruptions caused by 21 MPS belong to the Telugu Desam Party (TDP) and the All India Anna Dravida Munnetra Kazhagam (AIADMK).

Surprisingly, even one of the prominent voices from the Congress coming out in support of the Supreme Court verdict allowing women’s entry into the Hindu shrine, Shashi Tharoor, has now done an about turn on his position.

“Hearing my constituents on the matter, I realised the issue is not of equality but of sanctity. We have in the Hindu religion practices that cannot be reduced to rationalistic propositions. Let’s also not forget that there has never been a mass movement of women seeking entry into Sabarimala temple...,” Tharoor stated.