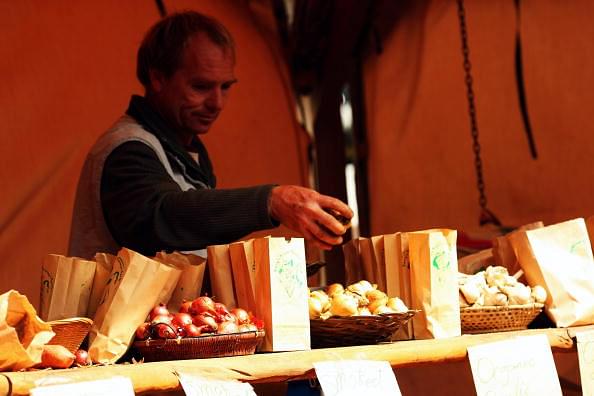 Representative image of onion and garlic being sold at a farmers’ market in New Zealand. (Photo by Phil Walter/Getty Images)

ISKCON’s Akshaya Patra Foundation, which currently provides mid-day meals for 4.43 lakh children every day in Karnataka, is in the eye of the storm surrounding the exclusion of onions and garlic in its meals, DNA has reported . The Karnataka government has directed the organisation to start including the ingredients in its meals to improve nutrition and taste.

Akshaya Patra follows religious dietary restrictions which only allow ‘sattvic’, or balanced food, rejecting ‘tamasic’ ingredients like onion and garlic which are associated with lethargy, lack of focus and confusion. This dietary system draws from principles enshrined in Ayurveda, Yoga and the Upanishads.

The state government has pulled up the organisation for its dietary system after Karnataka’s Food Commission recommended that onion and garlic be included in mid-day meal preparation.

Joint Director of Karnataka's mid-day meal scheme M R Maruti stated that onion and garlic add to nutrition and improves the taste. “Considering this, we asked the foundation to follow the state menu, but they have not yet replied to our letter," he added.

Akshaya Patra has defended its food preparation norms and stated that it is already complying with all the nutritional guidelines issued by the Ministry of Human Resource Development (MHRD) and the Karnataka Government.

A senior executive of ISKCON Kulashekara Chaitanya Dasa explained that the meals prepared by Akshaya Patra met the nutritional and calorific criteria set by the authorities. Chaitanya argued that onion and garlic were substituted by other vegetables with the same nutritional value. He added that they were willing to rectify if there are any issues in food preparation, but that the government could not specifically tell them what ingredients to use.