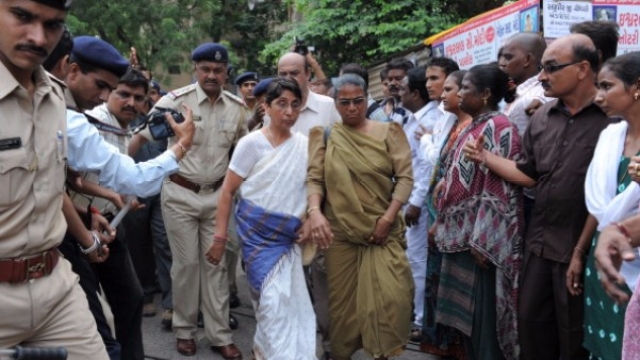 Maya Kodnani, escorted by police on arrival at a special court in Ahmedabad. (SAM PANTHAKY/AFP/Getty Images)

The court was hearing 11 appeal petitions moved by the convicts, the Supreme Court-appointed Special Investigation Team (SIT) and the families of the victims. The division bench of justices Harsha Devani and A S Supehia had reserved its order in August last year after finishing hearing in the case.

Kodnani was awarded a 28-year jail term and Bajrangi was sentenced to life by a court in the riot case in 2012. She was granted bail in 2014. Over 30 others were also convicted in the case while 29 were acquitted due to lack of evidence.

In its report, the SIT investigating the riot case had said that Kodnani incited mobs and was seen at the spot by witnesses.

In the riots in Naroda Patiya, a suburb of Ahmedabad, around 100 Muslims were killed. The incident was sparked by the Godhra train burning of 27 February 2002, in which 59 Hindu kar sevaks (religious volunteers) returning from Ayodhya were killed.

Case Against Maya Kodnani, Convicted In 2002 Riots, Has Gaping Holes