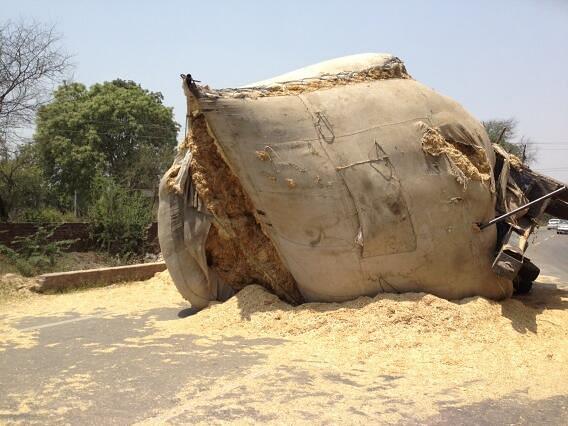 An overloaded truck that has tipped over. (pic via Twitter) (representative picture)

A couple belonging to the Indian Administrative Services (IAS), along with five others, is under investigation for extortion in Haryana’s Charkhi Dadri district, Tribune has reported.

“The mobile phones of the said officers have been sent for laboratory examination to dig out the details of the calls and communications involving the persons who have been arrested in connection with the case,” an SIT member has been quoted as saying in the report.

The SIT had unearthed the racket in May in which money was being extorted from operators and owners of overloaded vehicles by threatening them with challans.

“After extorting the money, the overloaded vehicles were allowed to pass through Dadri, Narnaul, Jhajjar, Rohtak, Bhiwani and Sonipat districts without getting challaned,” the SIT member said.

Five others have been arrested by the SIT in the case and almost Rs 64 lakh have been recovered. The IAS couple had been transferred since the matter came to light.