HD Deve Gowda Commends PM Modi, Says Continued In Lok Sabha Only Because Of Him 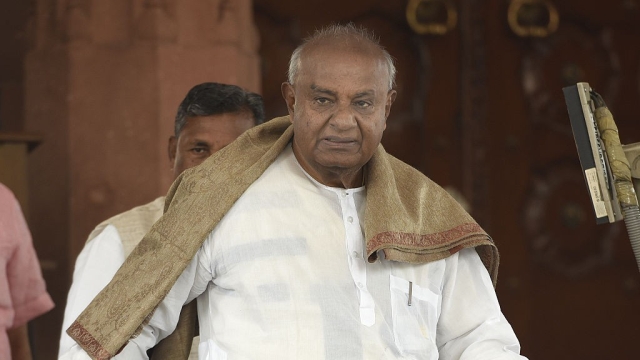 Even as the their parties are set for a face-off in the upcoming Karnataka elections, Janta Dal (Secular) supremo HD Deve Gowda has commended Prime Minister (PM) Narendra Modi and said that he was still in the Lok Sabha only because of PM Modi’s persuasion, Times of India has reported.

PM Modi is currently in Karnataka for the last leg of the BJP campaign with most surveys predicting a hung assembly. Karnataka goes to polls on 12 May and results to be declared on 15 May.

Gowda’s remark comes in the backdrop of Rahul Gandhi attacking him during one of his election rallies while PM Modi heaped praise on him later. However, Gowda was quick to dismiss talk of any alliance between the two parties if the results actually throw up a hung assembly.

“Before the 2014 elections, I had said I would resign my Lok Sabha membership if BJP gets a majority on its own. I decided to resign, but Modi persuaded me against doing so. He said the country needs the experience and services of senior leaders,” Gowda said.

The BJP won 282 seats in the Lok Sabha elections in 2014, thereby crossing the 272 seat majority mark on its own.

He also said that PM Modi was a ‘smart politician’ and is aware of the ground reality of Karnataka politics. “Modi is aware about the happenings in Karnataka politics, and also what Rahul Gandhi said about me. In this background, he must have praised me out of respect,” he said.

However, Karnataka CM Siddaramaiah attacked the PM for his statements on Gowda and said that they were indicative of a ‘tacit understanding’ between the BJP and JD(S).

Gowda also claimed that his party would get a majority on its own in the elections.