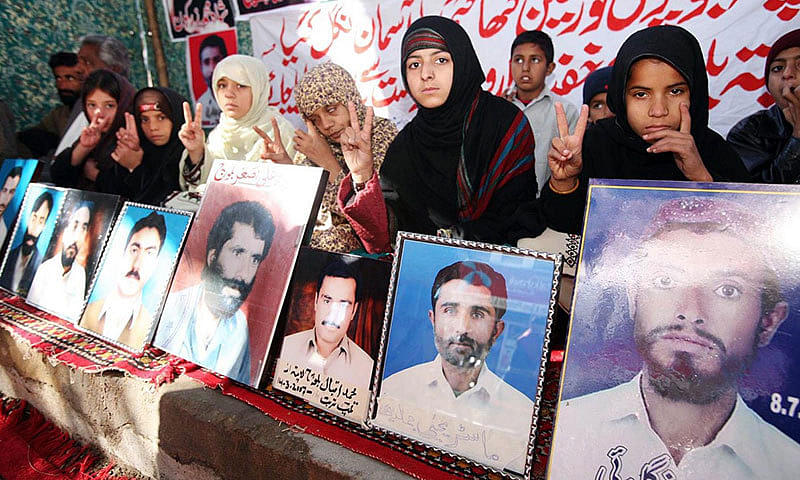 Families with photos of those killed by the Pakistan army. (Dawn.com)

Baloch leaders will soon have a ear – the biggest one, in fact – at the White House. Exiled Baloch political leaders and activists will soon be meeting United States President Donald Trump and asking him to cut off military and economic aid to Pakistan for its abuse of the Baloch people, reported ANI.

As per the report, they are set to speak to Trump about the genocide of the Baloch community. Azizullah Bugti, an activist associated with the Baloch Republican Party, is quoted by ANI as saying,

Our demand from the US administration is to stop funding Pakistan in the name of terrorism because, the funds given by the US are being used against the Baloch instead of against the terrorists.

Many have fled Balochistan province to settle in Europe, Canada and the United States over the years to escape the human rights abuses carried out by the Pakistan army. According to figures released by Pakistan’s Federal Ministry of Human Rights, as many as 1,000 bodies of freedom activists have been found in Balochistan since 2011. Additionally, International Voice for Baloch Missing Persons has claimed that 18,000 Baloch had gone missing (up till 2014), and 2,000 were killed between 2001 and 2013. Naturally, some have looked to the US to force Pakistan to end their occupation of Balochistan and the resulting human rights abuses.

Now that the matter will be discussed with the US President himself, it remains to be seen what steps, if any, will result from the talks. But one thing’s for sure – Pakistan is going to find it harder and harder to hide its deeds in Balochistan.