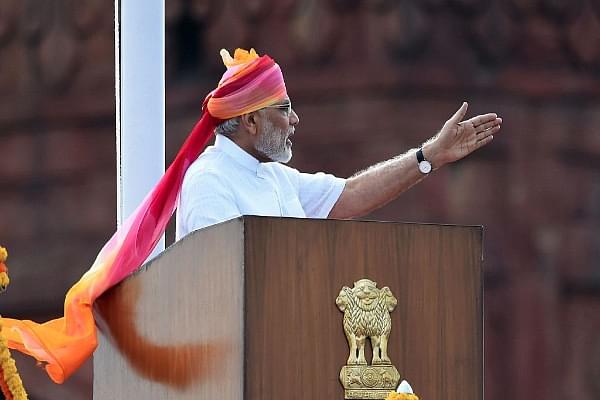 There is no other way of parsing Prime Minister Narendra Modi’s remarks about Balochistan in his Independence Day address to the nation on 15 August 2016.

In his one-and-a-half-hour-long speech at the Red Fort to mark India’s 70th year of independence, the Prime Minister had just one sentence on the troubled regions controlled by Pakistan. But that one sentence was enough to spark off acute heartburn not just in Pakistan but also in China.

After spelling out a long list of things that his government had achieved and had hoped to achieve, Modi spoke of how Indians wept after the killing of children in a Peshawar school in December 2014 while the terrorists exulted.

And then he declared:

Today from the ramparts of Red Fort, I want to greet and express my thanks to some people. In the last few days, people of Balochistan, Gilgit, Pakistan Occupied Kashmir have thanked me, have expressed gratitude, and expressed good wishes for me. The people who are living far away, whom I have never seen, never met – such people have expressed appreciation for Prime Minister of India, for 125 crore countrymen. This is an honour for our countrymen.

He didn’t think it necessary to spell out what exactly he was being thanked for. Because the threat was implicit.

Earlier, following the uproar over the death of Hizbul Mujahideen terrorist Burhan Wani in a shootout with security forces in Kashmir 8 July 2016, Nawaz Sharif had lauded Wani as a martyr to the Kashmiri cause and pledged to continue supporting the separatists in the Valley.

But it would be naïve to assume that Modi’s mention of Balochistan, Gilgit-Baltistan and Pakistan-occupied Kashmir (PoK) was just a reaction to the latest Pakistani provocations.

It is far more likely to have been a well thought-through plan conceived in consultation with his national security adviser Ajit Doval, who has repeatedly said that the only way to check Pakistani shenanigans and its export of terror was to make it ‘expensive’ for Islamabad. The carte blanche to the Indian forces guarding the border with Pakistan to respond to any cross-border firing with double the firepower and ferocity is part of that strategy.

Modi’s statement was thus a clear warning shot across the bow of not just Pakistan, but by extension, China, which has extensive strategic and economic interests in Balochistan and Gilgit-Baltistan, earlier known as the Northern Areas.

Balochistan, Pakistan’s largest province, shares borders with Afghanistan and Iran and is rich in mineral and fuel resources. It also hosts the deep-water port of Gwadar, which is a key feature of the China-Pakistan Economic Corridor (CPEC) plan and a critical component of China’s massive One Belt, One Road project. The port was leased last year to China till 2059 and is considered by India as part of the String of Pearls, meant to encircle India strategically.

Pakistan has often accused India of fomenting unrest in the region and believes Modi’s I-Day remark only vindicates this. However, the simmering separatist unrest in the region has much to do with the local population’s belief that the government in Islamabad was exploiting the region’s resources and not giving them anything in return. The Chinese working on the Gwadar Port and other projects have faced attacks, and the government has reacted with a brutal military clampdown, using tanks and troops to quell any sign of dissent.

“After PM Modi’s speech in favour of the people of Balochistan, more than 50 civilians have been killed in Dera Bugti district alone. More than 150 Balochs have been abducted. No one knows their whereabouts. We don’t know whether they are dead or alive,” India Today quoted Sardar Meer Bakhtiyar Khan Domki, the head of Domki tribe and a prominent Baloch activist, as saying.

Gilgit-Baltistan is the area administered by Pakistan in the northern reaches of Kashmir, a part of which was ceded to China in 1963. The presence of a large contingent of Chinese ‘engineers’ working on several infrastructure and telecom projects in the region has been a cause for concern among India’s strategic circles, as well as among the local residents. The Shia majority region has also seen several clashes and protests over Islamabad’s attempt to change the demographics of the region by flooding it with Punjabis and Pakhtoons.

“In May 1988, low-intensity political rivalry and sectarian tension ignited into full-scale carnage as thousands of armed tribesmen from outside Gilgit district invaded Gilgit along the Karakoram Highway,” said an article in the May 1990 issue of the Herald, a monthly magazine of Pakistan’s Dawn Group of Publications.

Nobody stopped them. They destroyed crops and houses, lynched and burnt people to death in the villages around Gilgit town. The number of dead and injured was put in the hundreds. But numbers alone tell nothing of the savagery of the invading hordes and the chilling impact it has left on these peaceful valleys.

In August 2010, Selig S Harrison, director of the Asia Program at the Center for International Policy and a former South Asia bureau chief of The Washington Post, wrote:

There has been an influx of construction, engineering and communication units of the People’s Liberation Army into Gilgit-Baltistan, under the command of the Xinjiang military district, totalling at least 7,000 military personnel....In addition, several thousand PLA troops are said to be stationed in the Khunjerab Pass on the Xinjiang border to protect Karakoram Highway construction crews, with ready access to Gilgit-Baltistan.

And according to B Raman, former Additional Secretary of the Cabinet Secretariat of the Government of India and one-time head of the counter-terrorism division of the Research and Analysis Wing, the Karakoram Highway, which passes through the region, “is also used for the movement to Pakistan of Chinese nuclear and military equipment like the M-11 missiles, equipment for the nuclear power station being constructed with Chinese assistance, etc. The two countries do not transport such sensitive equipment by sea to avoid detection by the USA.” (‘The Northern Areas: Behind Pakistan’s Iron Curtain’, published in the September 1996 issue of Strategic Analysis)

“American satellite monitoring of the area detected a shipment on 1 May on the China-Pakistan border.  By US intelligence estimates, it was one of the 12 consignments sent by ship and truck since the beginning of the year,” said a report in the Washington Times dated 6 August 2001.

Which is why Modi’s I-Day remark sparked consternation in both Islamabad and Beijing.

Hu Shisheng, the Director of the Institute of South and Southeast Asian and Oceanian Studies at the China Institute of Contemporary International Relations, a government think tank, told the Indo Asian News Service (IANS) in an interview that “The latest concern for China is Prime Minister Narendra Modi’s speech from the Red Fort in which he referred to the issues like Kashmir (occupied by Pakistan) and Balochistan...It could be regarded as a watershed moment in India’s policy towards Pakistan. Why Chinese scholars are concerned is because this is for the first time India has mentioned it.”

According to IANS, “Hu said China fears India may use “anti-government” elements in Pakistan’s restive Balochistan where Beijing is building the $46 billion CPEC – a key to the success of its ambitious One Road One Belt project. “There is concern that India may take the same approach, which is believed by the Indian side Pakistan is taking, asymmetrically using anti-government factors in Pakistan...if this kind of plot causes damage to the CPEC, China will have to get involved”.”

The China-Pakistan Economic Corridor, a critical part of Chinese President Xi Jinping’s One Belt One Road project, envisages a 2,400-km long network of roads, pipelines and rail connectivity between China’s Xinjiang Province and Gwadar Port in Balochistan. New Delhi objects to the section which passes through Gilgit-Baltistan and PoK, which India claims as its own.

Reacting to the Chinese warning, a former Indian intelligence officer said that “instead of wagging its finger at India, China would do well to advise its lapdog Islamabad to stop interfering in Kashmir. For far too long, India has allowed Pakistan to steer the rules of engagement over Kashmir. In fact, we had refused asylum to several Baloch leaders as well as rebels from Gilgit-Baltistan earlier, because we did not want to be seen as interfering in Pakistan’s ‘internal affairs,’ even though we claim the Northern Areas as our own.”

“Similarly,” he said, “China must remember that we had declined a long-standing Mongolian offer to set up an Air Base there, to avoid ruffling Chinese sensibilities. But keep in mind that Mr Modi was the first ever Indian Prime Minister to visit Mongolia in May last year, immediately after his visit to China.”

Another serving Indian official who spoke on the condition that he not be identified said that Modi had “indeed changed the rules of engagement with Pakistan, and by proxy, China. A threat by definition is capability combined with intention. If we had wanted to, we could always have raised the stakes for Pakistan in Balochistan. The pro-Modi rallies in the region after his comment, as well as the rallies in Leipzig, Germany, by expat Balochis, indicate how easy it would be for us to get into that game. But we did not, thinking that Pakistan would eventually realise that its dream of acquiring Kashmir was not based on reality. But after 70 years, during which Pakistan tried every trick in the book, including wars and nuclear blackmail, it still keeps hoping for parity with India by keeping the Kashmir dream alive. It is about time we turned that dream into a nightmare.”