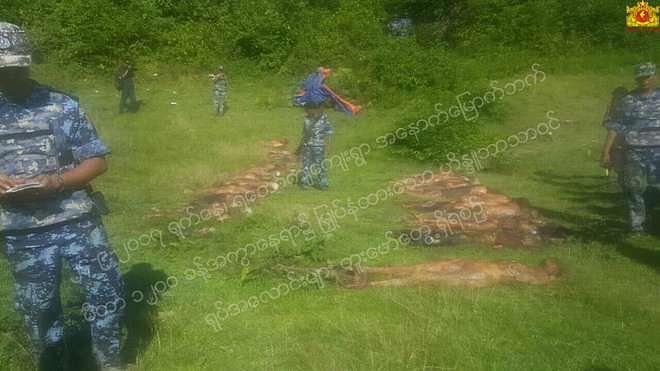 Pictures of the site released by Myanmar’s State Counsellor Office.

An investigation conducted by human rights group Amnesty International has revealed that Rohingya terrorists operating in Myanmar had massacred around 99 Hindus living in the Rakhine state, BBC World has reported.

According to the report, the killings of Hindus took place during an uprising against the Burmese Army. A large number of Hindus - a small minority in the region - were displaced because of the conflict that followed.

The mass killings were carried out by the Arakan Rohingya Salvation Army (Arsa) in a cluster of villages in northern Maungdaw. On 26 August, the terror group attacked the Hindu village of Ah Nauk Kha Maung Seik.

"In this brutal and senseless act, members of Arsa captured scores of Hindu women, men and children and terrorised them before slaughtering them outside their own villages," the Amnesty International report says.

“They robbed, bound, and blindfolded them before marching them to the outskirts of the village, where they separated the men from the women and young children. A few hours later, the ARSA fighters killed 53 of the Hindus, execution-style, starting with the men,” the report prepared by the human rights group adds.

The terrorists forced Hindu women to ‘agree to convert’ to Islam, Amnesty says.

Bodies of at least 45 people from the village of Ah Nauk Kha Maung Seik were unearthed in four mass graves in late September.