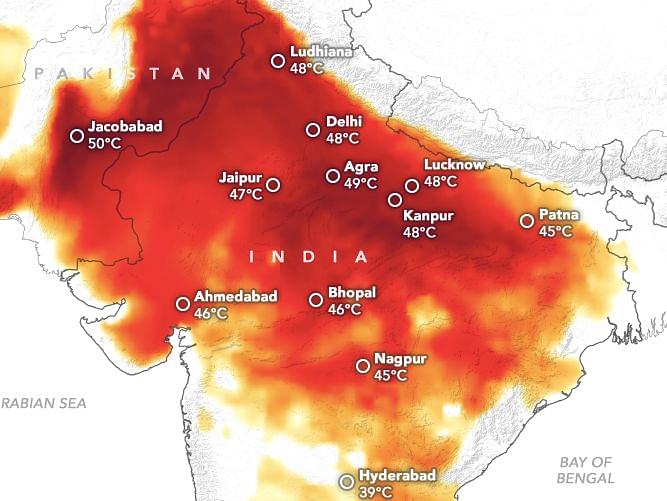 Climate change is now becoming increasingly visible with the world recording its hottest June since 1880 this year, BBC has reported.

Unites States climate body National Oceanic and Atmospheric Administration (NOAA) has published its report on the change in temperatures throughout the world, with the warning of an upcoming ‘dangerous heatwave’ for the country.

The average temperature recorded worldwide for the month of June was 61.6 F, or 16.4 C, 1.7 F higher than the 20th century average. The report predicts heatwaves in parts of Europe, Russia, Canada and South America with temperatures reaching upto 43.3 C.

Last June was also the hottest on record for the period between 1880 to 2019, beating out June 2016 to take the top spot. Nine of the hottest recorded Junes have been recorded in the past 10 years reportedly.

India too was scorched by intense heatwaves during the summers with several regions recording temperatures well above 45 C. The number of heatwaves across India has also been increasing, as per the Ministry of Earth Sciences. India has had 11 of its 15 warmest years since 2004.

Climate change is affecting India’s monsoons too, with the India Meteorological Department (IMD) considering a revision of its 78-year old schedule for onset and delay of monsoons. Monsoon onset and withdrawal have been delayed across India by almost a week since the last few years.

The usual date for monsoon onset in India has been 1 June as per the schedule but June has been drier than normal for seven of the past of 11 years. Date of withdrawal is set at 1 September as per schedule, but the actual date for withdrawal was 29 September. The dates were set in 1941 and help dictate the cropping seasons across the country.