Hurriyat Leaders To Come Up With New Strategy As Islamic Jihad, Pro-Pakistan Narrative No Longer Viable In Kashmir 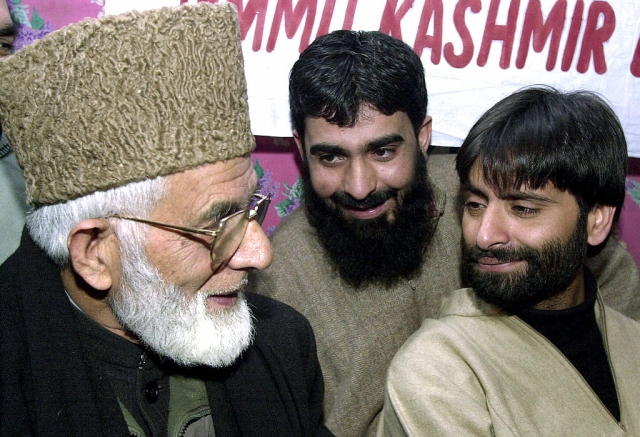 A new Hurriyat Conference with a distinct political agenda is likely to emerge in Kashmir, sources close to the separatist leadership told IANS.

The Hurriyat Conference, which has two factions -- one led by pro-Pakistan leader Syed Ali Shah Geelani and the other headed by relatively moderate leader Mirwaiz Umar Farooq, who has been leading the separatist movement against India for almost the last three decades.

Sources said the conglomerate of several separatist and Islamist organisations is in total disarray since 5 August when New Delhi revoked the special status of Jammu and Kashmir. The Modi government reorganised the state by bifurcating it into two Union Territories -- Jammu and Kashmir and Ladakh -- thus rendering Articles 370 and 35A redundant.

"The Hurriyat leaders were hoping that Pakistan will deliver some tangibles and not just rhetorical statements by Prime Minister Imran Khan at the United Nations. But Pakistan has been asking them to lay low for now," a source close to the Hurriyat said.

A top police officer in Srinagar said the Hurriyat members continue to be under detention or house arrest. "They are demoralised and quiet, almost in the same way as the Pakistani Army was after its defeat in the 1971 war with India. There is no clear instruction from Pakistan. They do not really know what to do. Earlier, they thrived because there was an ecosystem which protected them under both PDP and National Conference political dispensations. But since the crackdown on all the terror-funding cases and with the Articles 370 and 35A gone, they are cautious. They know that any illegal action will have serious consequences. For the first time, they are feeling the writ of the state," he said.

Pakistan, on the other hand, another police officer said, will remain focused on any civil disturbance in Kashmir and the rest of the country. "They have asked even the militants to lay low. Any act of terror will jeopardise Pakistan's line of action on Kashmir," he said. Pakistan Prime Minister Imran Khan has been raking up Kashmir across the world, by projecting India under the Modi government as a Hindu "fascistic" nation.

A youth activist close to the banned Islamist outfit Jamaat-e-Islami, in Anantnag district said, "Even as Imran Khan has enthused many in Kashmir by his rhetoric, the failure of the Hurriyat has created a lot of disillusionment and dejection among separatist youth in Kashmir." After several deliberations, a new strategy is being formulated, he said.

"The separatist youth are of the opinion that the entire Hurriyat leadership, especially the most influential Islamist leader Syed Ali Shah Geelani, failed to keep the state of Jammu and Kashmir together. They believe that the use of religion (Islam) by the Hurriyat in the separatist movement turned out to be counter-productive. They are now going to re-launch a new separatist movement under a new Hurriyat type of organisation which will be purely political in nature. The focus of the movement would be Kashmiri ethnicity rather than Kashmiri Muslim identity," a source close to Hurriyat leaders said.

A senior intelligence officer in Srinagar, however, said there is no organised movement in this direction. "There are inputs that separatists are rethinking all their previous strategies and intend to do something which will give credence to their movement. Islamic jihad for Kashmir has not enough buyers anymore. There is not enough ground support for pro-Pakistan, pro-Islamic State separatist movement. Overall, the general feeling is that nothing will be achieved with any separatist movement. So they will naturally do something different this time," he said.