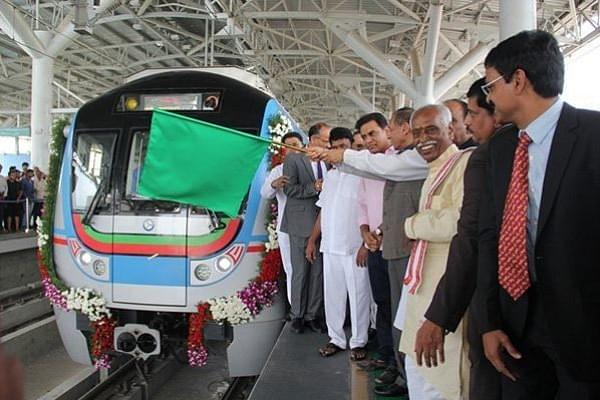 The Ameerpet-LB Nagar line of Hyderabad Metro was inaugurated by Governor E S L Narasimhan, MetroRailNews has reported. The Minister for Municipal Administration, K T Rama Rao, was also present at the event.

With the inauguration of this route, the 29-kilometre corridor from Miyapur to LB Nagar stands fully completed. This has also resulted in Hyderabad metro becoming the second largest in India after Delhi Metro. The construction of corridor two running from Jubilee Bus Station to Mahatma Gandhi Bus Station and corridor three from Nagole to HiTec City is in progress.

Till now, one lakh passengers have travelled in the Hyderabad metro. It is also touted to be the largest public-private partnership in the world. L&T Metro Rail Hyderabad has invested over ₹12,000 crore in the project. The project has secured a viability gap funding (VGF) to the tune of Rs 1,458 crore from the Central government.