‘I Am Working Like A Clerk, Not CM’: Kumaraswamy Complains Against Congress Influence In Karnataka Government 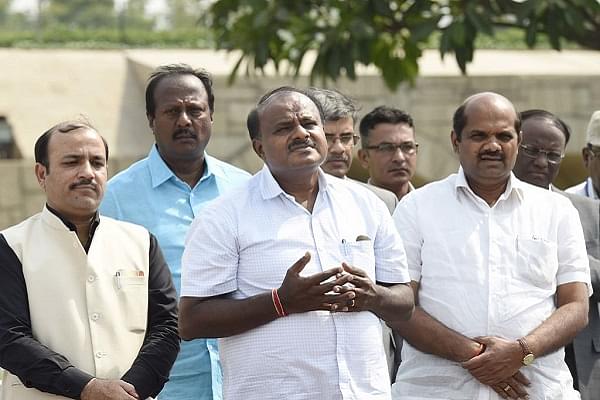 The rift between allies JD(S) and Congress seems to be widening after Karnataka Chief Minister (CM) H D Kumaraswamy has complained to his party that he is functioning not as a CM but as a clerk thanks to Congress interference, News18 has reported.

Kumaraswamy made this statement while addressing MLAs and MLCs of his party. In the meeting, he also reportedly lamented over Congress leaders forcing him to take decisions favouring them. He also alleged that he is expected to behave as Congress’ subordinate.

“He is sad. He almost cried. Told us that the Congress was behaving like a big brother. Forcing him to sign all kinds of orders. They forced him to expand the Cabinet and even appointed chairpersons to government-run boards and corporations without his approval. He feels that it is getting tougher with each passing day,” an MLA present in the meeting was quoted as saying.

Kumaraswamy was also reportedly heard complaining that he is working under “tremendous pressure”.