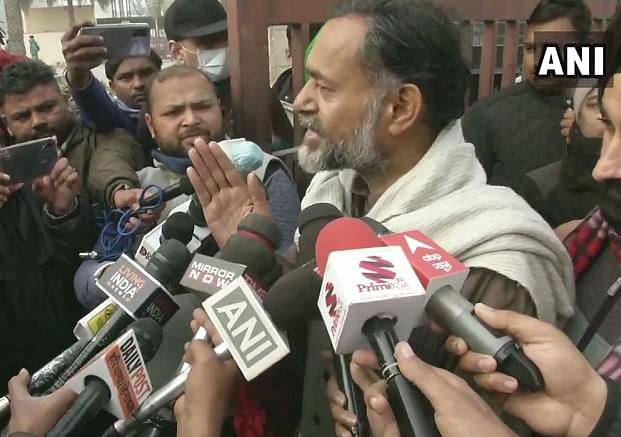 After the widespread violence in Delhi on the eve of Republic day by the protesting farmers, Social activist Yogendra Yadav said that he felt ‘ashamed’ of the way the tractor parade by farmers had turned out and took responsibility for it, reports The Times of India.

"Being a part of the protest I feel ashamed of the way things proceeded and I take responsibility for it,” Swaraj India president Yogendra Yadav said.

"Violence impacts any kind of protest in a wrong way. I cannot say at the moment who did it and who did not, but prima facie it looks like it has been done by the people that we kept out of the farmers’ protest," Yogendra Yadav told a TV channel.

"I appealed continuously that we stick to whatever route was decided and not deviate. Only if the movement goes peacefully, we will be able to win," he added.

The farmers’ tractor rally held on Tuesday (26 January) took a violent turn as the protesters refused to adhere to the regulations of the police. The mob stormed the Red Fort after breaking through barricades at different border points in Delhi.

Video footage showed protesters attacking the police personnel with lathis and swords in hands. They were also seen ramming their tractors into the buses parked by police in the ITO area of the Capital.

Reportedly, 83 police personnel have been injured after being attacked by protesters and at least 19 people have been taken to two Delhi hospitals following violence.

Several Delhi Metro stations and the Connaught Place were closed down amidst the chaos. The internet services in several parts of Delhi and the National Capital Region (NCR), including Sonipat, Palwal, and Jhajjar districts of Haryana, were suspended to arrest the spread of rumor.