“I Swear That Under The Leadership Of Sonia Gandhi, Sharad Pawar, Uddhav Thackeray..”: MLAs Pledge Loyalty To Coalition 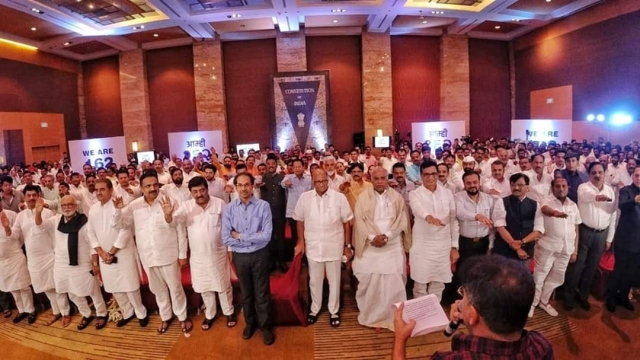 In an unprecedented action in Indian politics, the Shiv Sena-Nationalist Congress Party-Congress combine on Monday organised a public parade of their 162 supporting MLAs in a bid to disprove the claims of 170 legislators made by the Bharatiya Janata Party and its ally Ajit Pawar.

The dramatic parade, at a hotel here, came barely 12 hours before the scheduled hearing in the Supreme Court on Tuesday morning on the parties' challenge to the new government sworn-in early Saturday morning with Devendra Fadnavis as Chief Minister and Ajit Pawar as his deputy, creating a political upheaval in the state.

Abu Asim Azmi of the Samajwadi Party was also at the parade held at the banquet hall of the five star Grand Hyatt hotel in the western suburbs near the airport.

Several leaders addressed the gathering against a backdrop of large hoardings proclaiming "We Are 162" in different corners of the hall.

The leaders assured the gathered legislators - many of them first-timers, from some of the remotest parts of the state - that the three parties are in a full majority and they would soon give a stable alliance government in Maharashtra.

"In many states, the BJP has governments though it is not in a majority. The Centre is misusing its powers to grab power everywhere and Constitutional norms are being violateda... But this is not Goa or Manipur, this is Maharashtra," Sharad Pawar thundered.

He reiterated that his rebel nephew Ajit Pawar had "no powers or authority" to ally in the name of the NCP with the BJP and urged the gathering to preserve the unity seen on Monday.

Thackeray warned that those who attempt to create obstacles in the way of the unity of the three parties would be taught a severe lesson.

Patil and Thorat said that the three parties have already submitted a letter to the Governor earlier Monday staking claim to form the government on the basis of its support of at least 162 legislators.

"The people of the state don't support this government which took birth at the dead of the night. They (Fadnavis and Ajit Pawar) have lost public sympathy. All the legislators will vote against the government and it will topplea Later, our government will come to power," Patil said.

Later, the legislators and leaders took a solemn oath in the name of the Constitution, to remain united against all adversities within the law, not to do anything that would damage the Maha Vikas Aghadi, to ensure that the BJP-led government is defeated on the floor of the assembly among other points.

"The BJP has been consistently claiming that they have over 170 MLAs on their side, but has never given the actual names of their supporting legislators. We have produced all our supporting legislators in full publica The BJP will lose the floor test in the assembly," NCP National Spokesperson Malik had said earlier.

This public parade, including a joint photo-session, comes a day after the top leaders of the three parties addressed 'cross-meetings' of the legislators of each other's parties, again a unique development in politics.

Earlier, the parties had taken full precautions with their valuable legislators, taking their sworn affidavits of support, their names/signatures/identity papers/etc, to ensure nobody revolts later.

The trend-setting development was covered by the media in full strength, and each person was permitted inside the hall only after a proper scrutiny amid tight police security inside and outside the hotel.