‘If Not Om What Should I Have Drawn On Rafale’: Rajnath Singh Slams Congress For Shashtra Puja Remarks 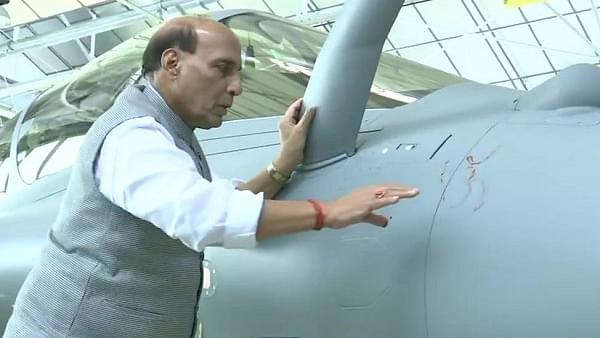 Defence Minister Rajnath Singh on Thursday (17 October) took a dig at Congress party for mocking the ‘Shasta Puja’ of the first Rafale jet of Indian Air Force (IAF) and asked former president of the party Rahul Gandhi what he should have written on the combat aircraft if not ‘Om’, reports Free Press Journal.

"Worshiping weapons during Vijayadashami is a tradition. When I wrote 'Om' on the Rafale jet, people said why I wrote it. I want to ask Rahul Gandhi if not 'Om', then what should I have written during 'Shastra Puja'?" Singh said while addressing a rally in Haryana.

Singh received the first Rafale jet from France on behalf of the Indian Air Force on 8 October. He also performed a puja on the jet, inscribed it with an Om tilak and laid flowers, coconut and lemons, believed to ward off the evil eye. He then took a 35-minute sortie in the two-seater aircraft.

Congress leader Rahul Gandhi had said that that the defence minister had gone to Paris to receive the first Rafale jet because there was “guilt” in the minds of BJP leaders over the multi-crore deal.

The Assembly polls in Haryana are scheduled to be held on 21 October while the counting of the votes will take place on 24 October.