“If Shri Ram’s Name Is Not Taken In India, Will It Be Chanted In Pakistan?” Amit Shah Asks Mamata Banerjee 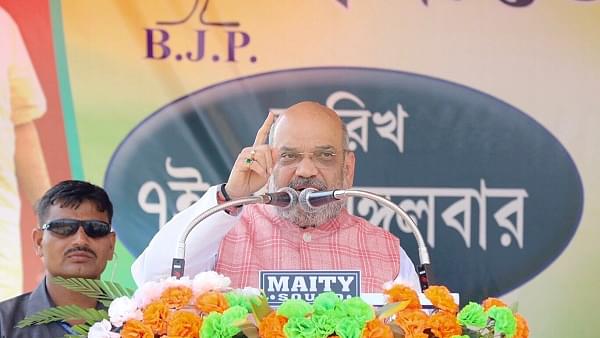 Alleging that Trinamool leader Mamata Banerjee was preventing people in West Bengal from uttering 'Jai Shri Ram', BJP President Amit Shah on Tuesday (7 May) rhetorically asked if the Hindu God's name would be taken in the Islamic country Pakistan if it was not allowed in India, reports Economic Times (ET).

"Lord Ram is a part of the culture of India... Can anybody stop people from taking his name? I want to ask Mamata didi, if Shri Ram's name is not taken in India, will it be chanted in Pakistan?" he said while addressing a rally in the state.

Threatening West Bengal chief minister Mamata Banerjee to arrest him for uttering 'Jai Shri Ram' at the multiple election rallies in the state, Shah added, "I want to tell Mamata didi that this is West Bengal and not Pakistan... I am going to Kolkata from here (Bishnupur), put me in jail if you have the guts."

These remarks from the BJP President come after a video went viral on Whatsapp on 4 May showing Banerjee stepping out of her vehicle in West Midnapore district to confront a group of people chanting "Jai Shri Ram."

Even PM Modi echoed Shah’s sentiments. "I want to say to the people of entire West Bengal, 'Jai Shri Ram'. I want to say it especially to Mamata didi. Didi has started to put people in jail for chanting 'Jai Shri Ram'. So I thought that I should also say 'Jai Shri Ram' to her directly. May be she would put me in jail as well," said Modi at an election rally in the state.