If What OPS Says Is True, Are We Looking At An EPS-OPS-BJP Alliance In Tamil Nadu For 2019? 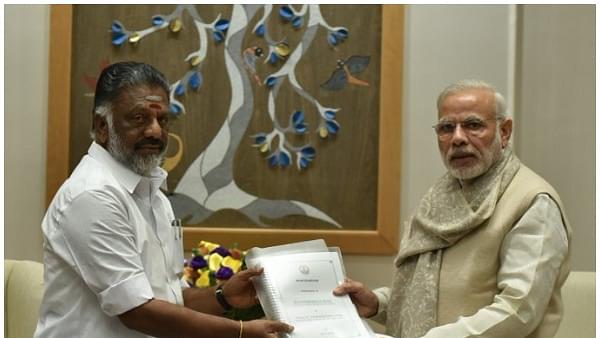 "He (Modi) said that you (Panneerselvam) could join (merge the faction) to save the party," said the Deputy Chief Minister of Tamil Nadum (TN), O Panneerselvam (OPS) at an All India Anna Dravida Munnetra Kazhagam (AIADMK) meeting on Friday. He went on to claim that he told the Prime Minister, that he, OPS, would be content with just a post in the party but the Prime Minister insisted that he join the cabinet of TN Chief Minister, E Palaniswami.

If this indeed is true, what does it say about the political realities and possibilities in Tamil Nadu?

One, between the EPS-OPS faction, the TTV Dinakaran faction, and the DMK, the Bharatiya Janata Party (BJP) seems to have chosen the first one.

Two, if the above is true, it follows that in the 2019 Lok Sabha elections, there is a possibility of an alliance between the EPS-OPS faction, and the BJP. This would be a critical development as Tamil Nadu sends as many as 39 representatives to the Lok Sabha.

However, after the recent RK Nagar by-election, the momentum is seen to be with its eventual winner, TTV Dinakaran. Assuming that he is able to further consolidate his position in Tamil politics, would the BJP making a mistake by ignoring him in 2019?

And then there’s Rajinikanth and his party. Which side would he be on in 2019? Or will he create his own?