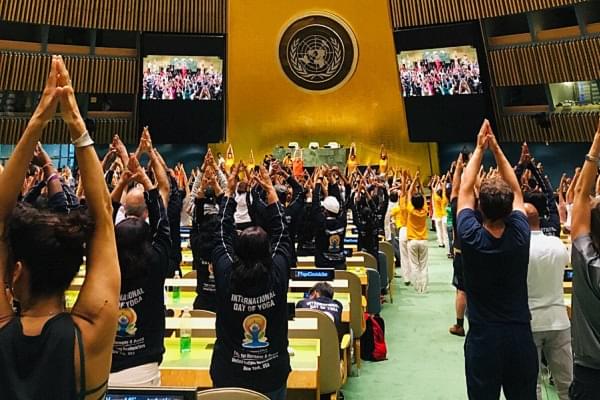 In a first, India hosted a Yoga session inside the United Nations General Assembly hall after rain disrupted the original plan of hosting the International Yoga Day session in the grounds outside.

As a result of the celebrations, the whole UN General Assembly hall reverberated with chants of Om Shanti. Those joining the session included various UN officials and diplomats along with the Indian delegation and Yoga gurus. The event was organised by India's Permanent Mission to the UN.

A brief video capturing the essence of the celebrations was shared by Indian Ambassador and permanent representative to the UN Syed Akbaruddin.

If it rains outside .....#YogaDay observance @UN moves to a better location inside - GA Hall pic.twitter.com/fUB8XNpsW6

He also shared a few pictures from the celebrations held inside the General Assembly hall.

While speaking at the occasion, the Deputy Secretary-General Amina Mohammed said that balance is the essence of Yoga both within oneself and also in one’s relationship with humanity.