In A Historic First, Members Of Transgender ‘Kinnar Akhara’ Take Holy Dip At Kumbh In Prayagraj 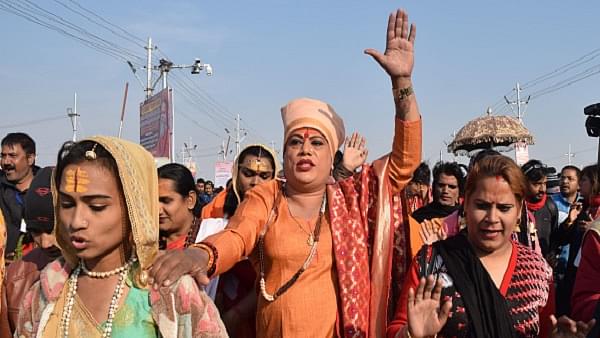 For the first time in history, dozens of transgenders who refer to themselves as ‘Kinnars’ took the ‘Shahi Snan’ or holy dip at the Ardh Kumbh Mela in Prayagraj on Tuesday (15 January 2019), overcoming strongly conservative resistance, reports The Hans India.

The Indian transgender community is estimated at around two million people, and it was the first time that its members were permitted to bathe at the confluence of the holy rivers of Ganga and Yamuna.

The ritual bath is meant to free individuals of all their sins and release them from the cycle of reincarnation.

“For us, this participation is about mainstream society accepting us. The creator is within us and once we die, we will go back to him. Our doors are open for all,” stated the head of Kinnar Akhara, Laxmi Narayan Tripathi.

The Kinnar Akhara is a religious order composed entirely of transgenders, but has not won official recognition from other mainstream Akharas.

“Establishing Kinnar Akhara aims to show the correct path to the next generation and to ensure that they do not face the stigma and discrimination we faced,” remarked the group's secretary, Pavitra Nimbhorker.