‘In The Pakistani Psyche, There is A Great Hatred For Hindus,’ Reveals 1971 Indian Air Force War Veteran 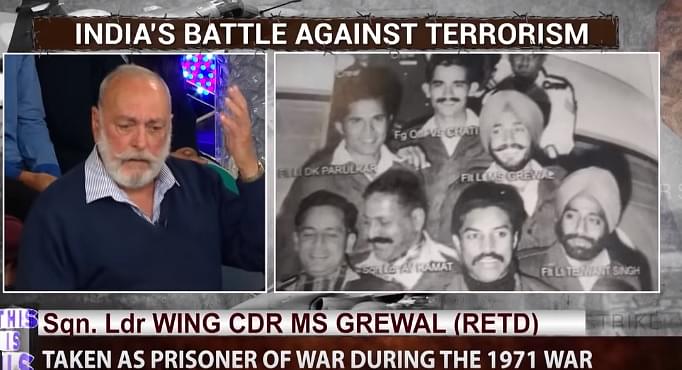 Screenshot from the TV show

‘In the Pakistani psyche, there is a great hatred for Hindus. In 1971, when we were prisoners of war there, we were very often told that Hindus have never ruled India, it used to be the Mughals and then the British took over,” Squadron Leader Wing Commander (retired) Melvinder Singh Grewal recently revealed in a television program.

He added, “Civilians there hate Hindus. In their school textbooks, there are chapters on hate [for] Hindus. We have seen them.”

Wing Cdr MS Grewal spent almost a year as a prisoner of war (PoW) in Pakistan and made a daring escape along with two other Indian pilots that is now subject of a film. It was during his days of captivity that he was subjected to this expression of hate.

“They teach their children that Hindus are kafir and that a Hindu is an enemy, and that Hindus are obstructing [Islamic] expansion,” Wing Cdr Grewal further said, hinting at the idea of ‘Ghazwa-e-Hind’, the idea of the prophetic Islamic conquest of the Indian subcontinent that is a frequent subject of the Islamist rhetoric in Pakistan and radical elements in India.

In another program discussing their escape, Wing Cdr Grewal recalled a Pakistani official calling them names. “Tum Hindu ho, tum ye ho, tum wo ho,” he said about the officer who had caught them during their escape.