India And US Agree To Work On Dismantling Terrorism Infrastructure 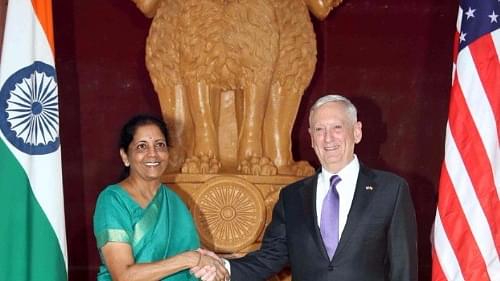 India and the United States on Tuesday (26 September) agreed to dismantle infrastructure that supports terrorism and recognised the importance of holding those who use terrorism as an instrument of state policy to account.

“We both recognise the importance of holding those who use terrorism as an instrument of state policy to account and to dismantle the infrastructure that supports terrorism,” said Indian Defense Minister Nirmala Sitharaman during a joint press statement with United States Defense Secretary Lt General (Retired) James Mattis.

She said the both sides discussed in depth the situation in India’s neighbourhood and the growing menace of cross-border terrorism.

Emphasising that cooperation in defence equipment has grown steadily over the past years between the two nations, Sitharaman said that the US is now a leading supplier of, state of the art defence equipment to India.

Sitharaman further said that the issues relating to maritime security in the Indian Ocean and broader Asia-Pacific Region as well as regional connectivity issues were also discussed during the talks.

“I welcome his reiteration of the US commitment to work with India in ensuring maritime security in the Indo Pacific and as first responder to HADR situations,” she added.

She said that the two sides also discussed ways to refocus and re-energise the defence technology and trade initiative (DTTI) as a mechanism to promote technology sharing as well as co-development and co-production efforts.

She ruled out any possibility of the country sending its troops to Afghanistan.(ANI)