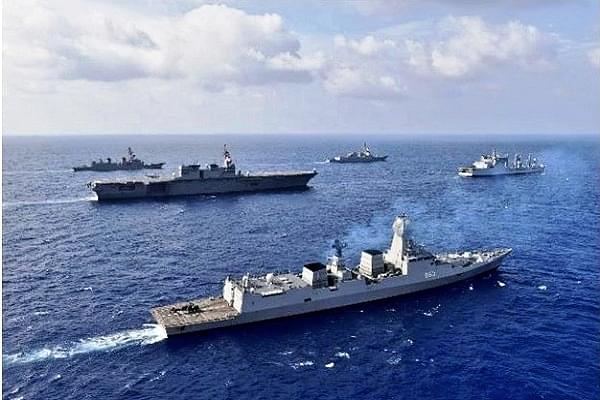 Representative image of a Naval Exercise

India is seeking to enhance its relations with nations in the Indo-Pacific region and is looking to hold a new series of joint military exercises with France and Australia.

In recent years, India's relations with both France and Australia have grown deeper and a number of bilateral joint training exercises have been conducted with the two nations in the Indian Ocean. However, as per an Economic Times report, there are now talks to take the exercises to trilateral level.

According to sources cited in the report, top officials of the three countries have discussed a trilateral naval exercise. The topic was also discussed during French Defence Minister Florence Parly's recent visit to India.

The partnerships with the two nations hold significance due to the ongoing tensions with China at the Line of Actual Control (LAC) and Chinese expansionist plans in the Indian Ocean Region (IOR).

The French Defence Minister, during his visit, had held high-level talks with his Indian counter part Rajnath Singh and National Security Advisor Ajit Doval and discussed the upcoming challenges in the IOR. The officials of India and France agreed on improving cooperation and ties, as per the sources cited by ET.

"Minister Parly’s visit to India for the Rafale induction ceremony marked a new chapter in Indo-French defence ties and demonstrated the exceptional trust between our two countries. The minister also discussed in detail with minister Rajnath Singh and National Security Advisor Ajit Doval how to further intensify our maritime security cooperation in the Indo Pacific, with the goal in particular of carrying out increasingly ambitious joint naval exercises," French ambassador to India Emmanuel Lenain was quoted by ET.