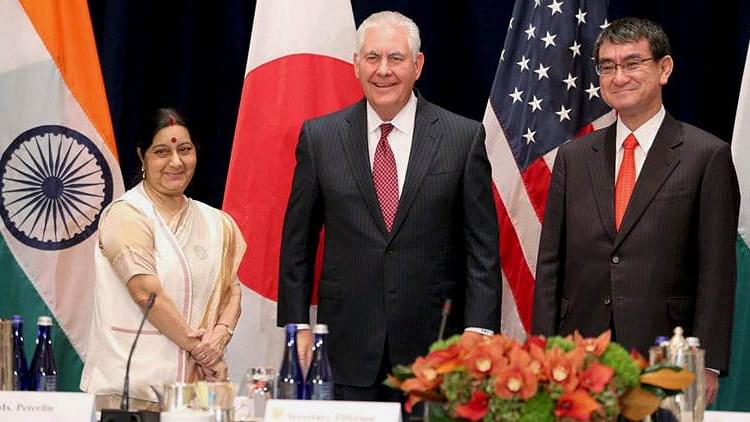 India, on Tuesday, sought investigations into North Korea’s nuclear proliferation linkages and asked to hold accountable those responsible for it, in a veiled reference to Pakistan. Minister of External Affairs Sushma Swaraj’s remarks came days after North Korea fired another mid-range ballistic missile over Japan on Friday.

It follows North Korea’s sixth and most powerful nuclear test on 3 September which was in direct defiance of United Nations (UN) sanctions and other international pressure.

“External Affairs Minister Sushma Swaraj deplored North Korea’s recent actions and stated that its proliferation linkages must be explored and those involved must be held accountable,” the ministry spokesperson Raveesh Kumar told reporters at a news conference at New York.

Swaraj’s assertion in this regard came during her trilateral meeting with United States of America - Secretary of State Rex Tillerson and her Japanese counterpart Taro Kono on Monday on the sidelines of the ongoing UN General Assembly session at New York.

Responding to questions, Kumar did not specify the country, but said the hints were enough to determine that. “I think I am giving you enough material to try to figure out what we are talking about,” he said.

“We have very clearly mentioned that we not only deplore DPRK’s recent actions but also stated that its proliferation linkages must be explored and those involved be held accountable,” Kumar said.

In addition to proliferation, the three leaders discussed the issue of maritime security and connectivity.

“On connectivity, there was discussion on how to base them on universally recognised international norms prudent financing and respect for sovereignty and territorial integrity,” Kumar said.

The first trilateral ministerial meeting between the three countries was held in 2015. Senior official level meeting has been taking place since 2011.