India Will Be The Most Consequential Partner For US In Indo-Pacific This Century: US’ Defence Secretary Mark Esper 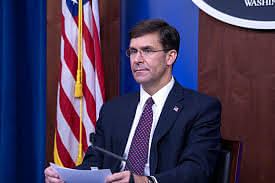 United States (US)' Secretary of Defence Mark Esper said yesterday (20 October) that India will be the most consequential partner for the US in the Indo-Pacific this century, reports Livemint.

Speaking on a webinar organised by a think tank identified as The Atlantic Council ahead of his visit to India for the 2+2 ministerial dialogue, Esper said, "Secretary Pompeo and I will be there next week. It's our second 2+2 with the Indians, the third ever for the United States and India. And it's very important. India will well be the most consequential partner for us, I think, in the Indo Pacific for sure in this century."

Esper also said, "India is the world's largest democracy, a very capable country, very talented people." He further added that India faces off with Chinese aggression in the Himalayas specifically along that Line of Actual Control every day.

Meanwhile, it should be noted that at the Webinar, Esper said, "There are a number of things that the US has been discussing with the Indians for some time. We've made good progress on a number of them, but we'll release information on that when it's appropriate."

The bilateral relations between the two nations have been witnessing a strengthening thaw over the recent years, and the upcoming 2+2 meeting is likely to add further depth to the same.