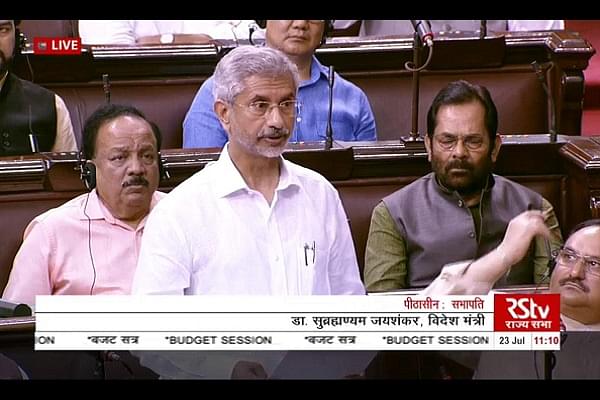 External Affairs Minister S Jaishankar on Thursday (28 November) told the Parliament that India will surely become a permanent member of the United Nations Security Council one day and it was "progressing day-by-day".

"I am realistic enough to know that it is long and patient effort. We are not lacking in patience, perseverance and aspiration. We will get there one day," Jaishankar told the Rajya Sabha in response to a query on when will India permanently join the United Nations Security Council.

He also said that Prime Minister Narendra Modi has reinforced India's relationship with all neighbouring nations, and that India is having good relations with all its neighbouring countries, except Pakistan. "Pakistan is a unique and different from other countries. With the rest of them, we carry a good rapport in terms of bilateral issues."

Jaishankar also said that the visits of the President, Vice President and Prime Minister have enabled India to cement bilateral partnerships.

The Minister said that the government has a comprehensive foreign policy outlook that reflect both the state of the world and India's growing role in it. "We have a multi-polar landscape that has been unfolding over the last decade, although its pace has hastened in recent years. Our own growing capability and influence is of course one part of this change," he said.

He stressed that it requires India to strengthen multilateralism even while engaging in more intensive bilateral interactions. "It also means looking beyond orthodox diplomacy and arriving at issue based understandings with different combination of nations."

Jaishankar also pointed out that to shape the global agenda effectively, India has to engage countries large and small across all regions.

"It is only a matter of advancing our own national interest. The expectations that the world has to us is also very much higher. In our own region this is visible in the Neighbourhood First approach as well as in the SAGAR doctrine," he said.

He said that India have pursued the Act East policy vigorously while building an effective bridge to the Gulf in the West. "Our Indo-Pacific outlook has steadily gained greater understanding. Our commitments to Africa and other nations of the South are well under implementation," the minister said.

He said that the cumulative impact of all this is therefore a combination of greater diplomatic activity more intensive development partnerships, stronger security engagements and growing global profile.

"Sabka Saath, Sabka Vikas, Sabka Vishwas in the founding principle of our foreign policy as well," he said.