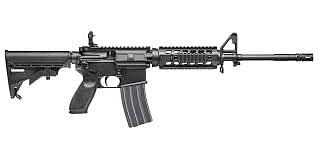 The Indian army’s infantry’s long wait to have an effective frontline assault rifle has come to an end as it has begun to induct the American SiG Sauer assault rifles in terror operations Jammu and Kashmir and Pakistan Army on the Line of Control (LoC), reports ANI.

Most of the infantry divisions in India were previously using the INSAS ( INdian Small Arms System) which had major problem with reliability. However, Sig Sauer SIG716 7.62x51 mm assault rifles will now give our soldiers the edge on fire power when dealing with heavily armed terrorists in Jammu and Kashmir.

The Indian army has also started getting supplies of ammunition for its sniper rifles and more than 21 lakh rounds have been ordered from vendors. Indian army, a while back, inducted .338 Lapua Magnum Scorpio TGT, and the .50 Calibre M95 by Barrett. The Barrett M95 is produced in the US and is an anti-material rifle which means it can penetrate even concrete or metal. It also has a range of 1,800 metres.

These new sniper rifles replace army’s ageing Dragunov SVD guns, which go back to the Soviet era and have limited kill range.

A top army source told ANI, "The first lot of 10,000 SiG 716 assault rifles has arrived in India and has been sent to the Northern Command."

The Northern Command has the responsibility of handling counter-terrorist operations in Jammu and Kashmir and to stop terrorists from crossing over from Pakistan and Pakistan-occupied-Kashmir (PoK), where they have their training bases.

The induction of these new assault rifles with the troops in operation will help them to operate more effectively in engagements with the terrorists in Pakistan and the PoK.

Also, more than 7 lakh AK-203 assault rifles will be produced in the joint venture between India and Russia.