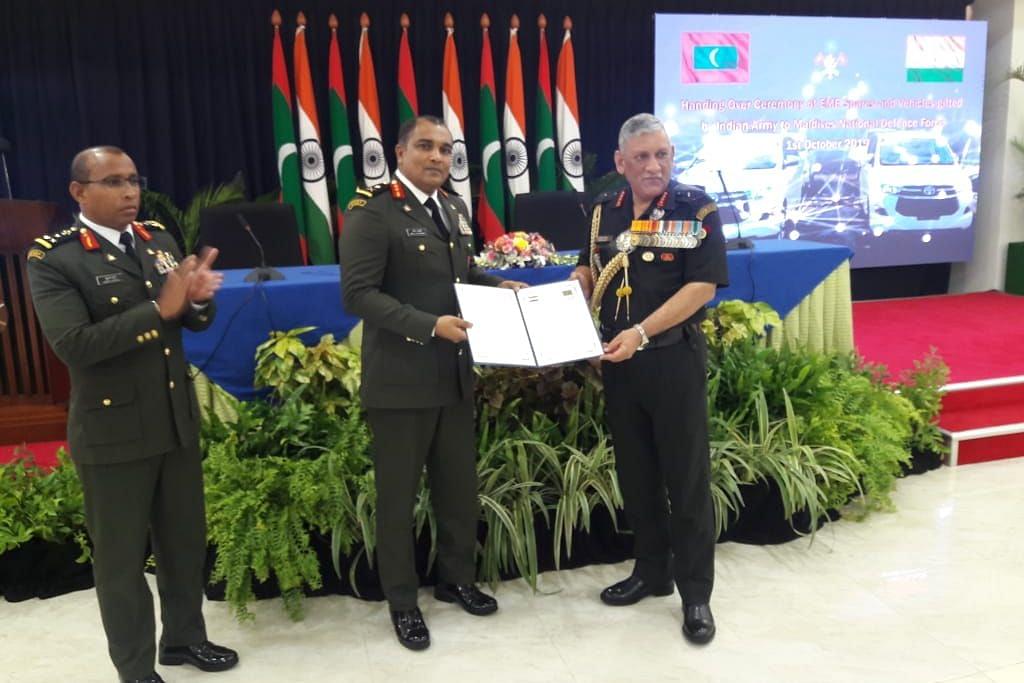 Indian Army Chief General Bipin Rawat on Tuesday (1 October) handed over some transport vehicles to the Maldivian National Defence Force (MNDF) as part of India's efforts to boost the operational capacities of the island nation amidst Chinese moves to gain influence there.

"Talks are underway to hand over different types of weapons and ammunition to the Maldives army. Assistance will also be given to Maldives to set up an engineering workshop and a diagnostic set-up for the vehicles and other equipment that have been given on Tuesday," a senior army officer told IANS.

Discussions during the meeting "revolved around the assistance that India's military could provide in order to boost the training and operational capabilities of the archipelago nation," a Maldivian English daily reported quoting the MDNF.

The strategic importance of Maldives for India can be gauged from the fact that India has taken upon itself to conduct its air and EEZ surveillance. India has supplied helicopters and surveillance equipment to Maldives in the past.

In view of the special importance, Prime Minister Narendra Modi had paid a visit to Maldives in June this year, his first foreign visit after being re-elected.

There have been reports about China trying to exert political influence over Maldives in order to secure its geopolitical interest in the Indian Ocean. China has reportedly invested billions of dollars in the archipelago nation during the rule of former Maldivian leader Abdulla Yameen.

Yameen, who was elected as President in 2013, imposed an emergency upon the country five years later, taking several political prisoners. Military assistance was sought from India by the former democratic leaders of Maldives.

India released a statement saying Maldives should abide by the rule of law, a position that threatened cordial relationships between the two countries. The Maldivian Democratic Party later recorded a landslide victory in the parliamentary elections, which were supported by India.

"Maldives can be a very vantage point in the Indian Ocean region if anyone takes control of it. It is located just 300 miles from India. Our EEZ is only 200 miles away from it," said a former Indian Navy official.