Indian Army To Realign Strike Corps To Enhance Strategies Amidst Standoff With China At LAC: Report 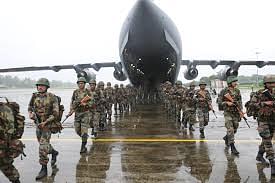 The Indian Army is considering restructuring two strike corps, namely 1 Corps and 17 Corps, to focus on the northern and eastern theatres to combat any threat from the Chinese side, The Print reports.

Strike corps is primarily aimed to conduct offensive trans-border action against the opposition and India currently has four of them. They are - Mathura-based 1 Corps, Ambala-based II Corps, partially-raised 17 Corps and the Bhopal-based 21 Corps.

The 1 Corps was earlier responsible for the western theatre bordering Pakistan. However, it is now being realigned to front the northern theatre too that overlooks the areas of Ladakh along with Jammu and Kashmir.

The 17 strike corps is the only existing mountain strike corps and it will persist focusing on the eastern theatre that covers north-eastern states’ borders with China and Sikkim.

Certain elements of the 17 Corps were stationed in eastern Ladakh earlier in 2020 perhaps due to the rising tensions along the Line of Actual Control (LAC). The 1 Corps will be deployed on the northern theatre along with its two infantry divisions. The 17 Corps will be handed an additional division to further upgrade its capability along the eastern theatre.

Furthermore, The Print reports that a division from the existing corps will be realigned to attend specifically to the central sector with China. This is being done to strengthen offensive options in the rise of any armed conflict with the middle kingdom.

“The western theatre is being reorganised in such a way that two strike corps continue to focus on that front with adequate support from the existing holding corps (those deployed for defensive options) to retain the offensive options against Pakistan,” one of the sources from the defence was quoted in the report.

The continuing deadlock with China resulted in the forces to coming up with these recent realignments. The soldiers will be trained in accordance with their new operational tasks and be groomed for contingencies in the mountains in any sector once these changes materialise.