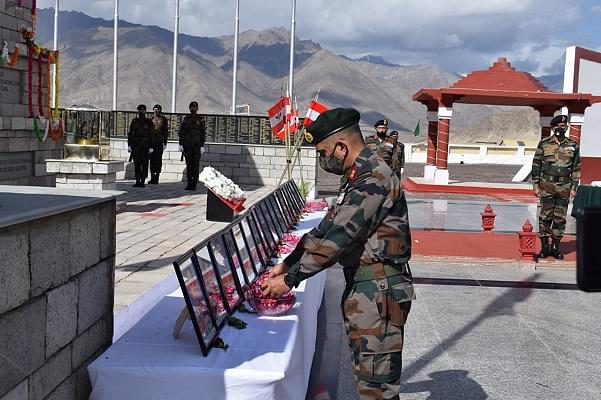 Fire and Fury Corps paid tribute to the 20 soldiers who lost their lives in the Galwan valley clash on the occasion of the first anniversary of the conflict on Tuesday (15 June).

Twenty soldiers had lost their lives in the clash with Chinese troops in the Eastern Ladakh sector on 15 June last year.

Major General Akash Kaushik, Chief of Staff, Fire and Fury Corps, laid a wreath at the War Memorial in Leh on occasion.

“COAS General MM Naravane and all ranks of Indian Army pay homage to the Bravehearts who made supreme sacrifice in Galwan Valley Ladakh while defending the territorial integrity and sovereignty of the country. Their valour will be eternally etched in the memory of the Nation,” the Indian Army spokesperson said in a tweet.

A year after the 15 June clash in the Galwan Valley — the worst violence on the India-China border since 1967 — the crisis in Eastern Ladakh is far from over.

While Indian and Chinese forces deployed on the north bank of the Pangong Lake and the peaks of the Kailash Range have disengaged, the standoff continues in Gogra-Hot Springs and Depsang Plains. Despite the relative calm along the Line of Actual Control (LAC) over the last few months, de-escalation is not in sight.

On both sides of the LAC, forces are now deeply entrenched, and new infrastructure has come up to sustain the unprecedented deployment of troops and equipment.