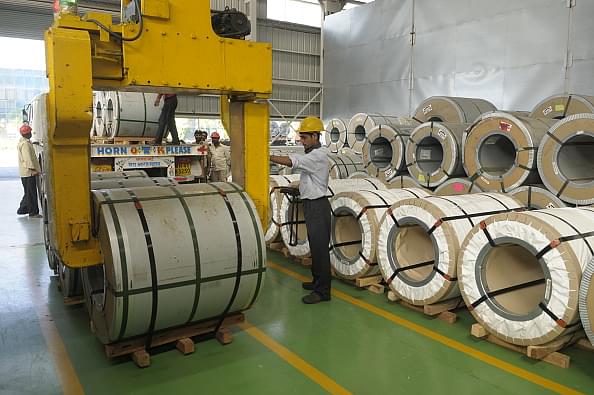 Steel rolls at a processing centre in Pune, Maharashtra. (Photo by ABHIJIT BHATLEKAR/Mint via Getty Images)

Even amidst the choppy waters of a global trade war, India has still seen a rise in its exports for 2018, although high crude prices for most of the year coupled with growing domestic demand has resulted in a faster-growing trade deficit, reports Business Standard.

2018 began with a 56-month high trade deficit in January, which rose to more than $153 billion till the period ending in October.

In spite of problematic capital shortages following the introduction of the GST, for half of the year, India saw double-digit export growth.

The current account deficit (CAD) has widened substantially despite this growth, due to the massive surge in crude import costs - driven by a strong bull market in oil markets. The CAD is seen to be tripling to $19-21 billion by Q2 of FY19, from only $7 billion in Q2 in the previous fiscal.

India’s performance in the currently volatile atmosphere of international trade is looked at as commendable, even as the Indian government tries to negotiate agreements with the Trump administration to not extend to India its trade war against major exporters such as China.