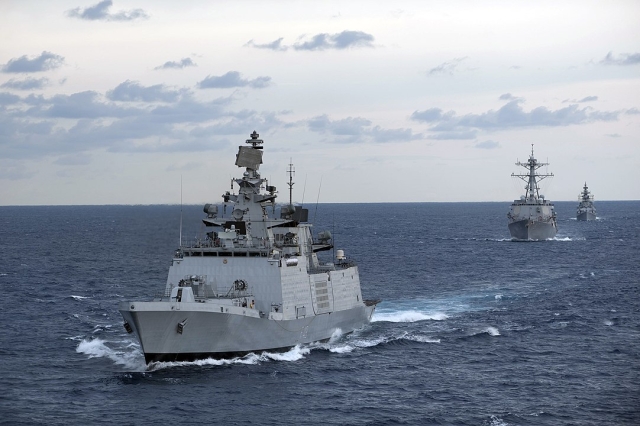 INS Satpura, part of the Project 17 warships. (via Wikimedia Commons)

With a considerable increase in the deployment of its warships in the Indian Ocean Region (IOR), the Indian Navy is providing strategic support to its fellow services in the ongoing activities related to the border tensions with China.

The Indian Navy is said to have increased deployment of warships in the IOR since the border tensions with China began, government officials said. Some estimates indicate that the increase is almost 25 per cent.

The officials said that past 100 days have seen the Indian Navy operating from the Ladakh (with its P-8I surveillance aircraft) in the north to Mauritius, 7,000 km to the south, and from the Red Sea in the west to the Malacca Strait in the east, a distance of nearly 8,000 km.

Indian Navy deploys ships on Mission Based Deployments at key locations in the IOR so as to build a comprehensive maritime picture and respond to developing situations.

At any time, there are warships patrolling the Bay of Bengal, the Malacca Straits, the Andaman Sea, the southern and the central Indian Ocean Region, the Gulf of Aden and the Persian Gulf.

Additionally, following maritime security incidents, a combat-ready warship has also been deployed on Operation Sankalp since June 2019 for protection of Indian merchant vessels passing through the Persian Gulf.

"Being a network-enabled force, the Navy maintains total awareness of the IOR by using the IFC-IOR (Information Fusion Centre-Indian Ocean Region), ships on Mission Based Deployments, P-8I and Dornier surveillance aircraft and other high-end surveillance tools," a senior government official said.

Near-coast surveillance is also coordinated by the Indian Navy by coordinating the resources of nearly 20 government agencies to draw an electronic fence over our coastline, to deter any 26/11-type incident.

After Chinese People Liberation Army's activities in eastern Ladakh increased in the months of May and June, culminating in June 15 clashes in which 20 Indian soldiers were killed, the chiefs of the Indian Army, Navy and Air Force are meeting on a daily basis to coordinate the joint response.

Since then, the Indian Navy has been at the forefront of strategic signalling to the Chinese forces.

Signing of the Mutual Logistics Support Agreement in June with Australia gave the Indian Navy access to the strategically located Cocos and Keeling Islands in the southern Indian Ocean, which will enable ships and aircraft to keep watch on Chinese Navy ships and submarines entering the Indian Ocean Region.

Similarly, the agreement provides Australian ships and aircraft access to the Andaman and Nicobar Islands, to extend their reach into the South China Sea.

The Indian Navy conducted four joint exercises with foreign navies during the Galwan crisis to signal intent to the Chinese Communist Party Navy.

The India-Indonesia coordinated patrol was conducted along the maritime boundary line on June 15 by ships and aircraft of both nations, while Japanese and Indian Navy ships also jointly exercised in the Indian Ocean Region on June 27.

Passage exercises were also conducted with French Navy in June and between the Indian Navy's Eastern Fleet and US Navy's Nimitz Carrier Strike Group in July.

These joint exercises were an affirmation of the resolve of the global comity against China's recent aggressions. The combination of joint resolve on the Line of Actual Control coupled with strategic signalling at sea seems to have had the desired effect, for now.

With the disengagement at Ladakh slowing down, the Indian armed forces are aware that this could be long drawn-out affair.

"Adequate operational tempo tempered with maintenance of readiness of men and materiel is the order of the day," the official said.

While the Indian Army mobilised on a war-footing in Ladakh and other areas along the LAC, the Air Force has forward deployed its top-of-the-line aircraft.

Indian Navy deployed the P8I Poseidon aircraft to Ladakh to provide valuable intelligence on PLA's mobilisation on the LAC.

"Aptly named after the Greek god of the sea, the P-8I is an all-weather aircraft with latest sensors and weapons, and is a maritime domination platform," said a senior government official.

The cutting-edge performance of the aircraft has now prompted the Indian Navy to place orders for another 10 of these aircraft, which will soon increase its inventory to 18.

The Indian Navy is now set to induct the carrier-borne strike aircraft Mig-29K to fly combat air patrols along with Indian Air Force jets in Ladakh - a credit to the joint pilot training programme of the Indian armed forces.