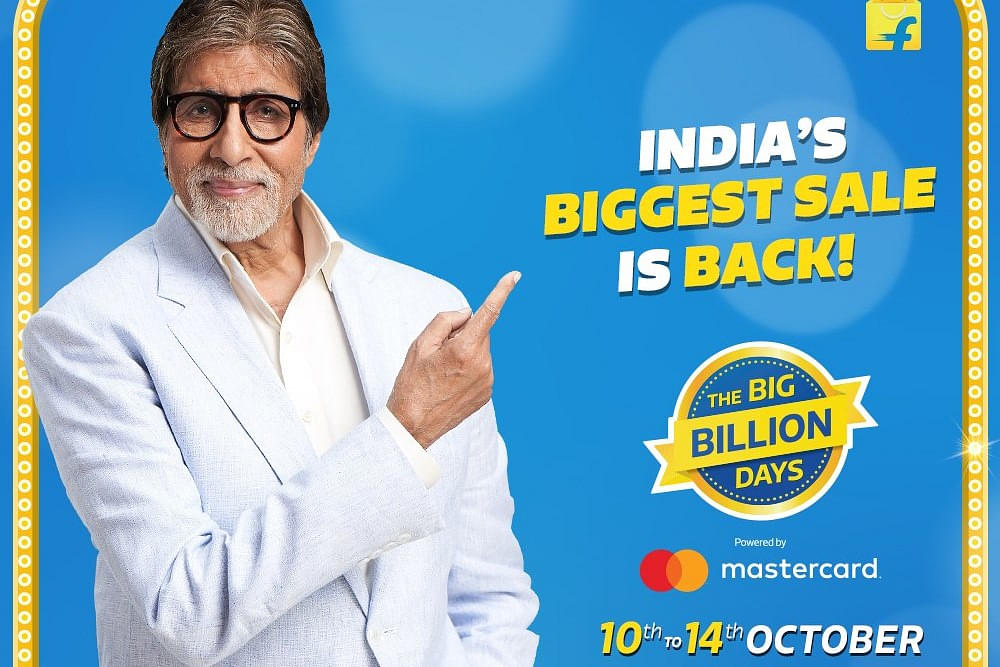 Flipkart roped in the who’s who of Bollywood and Cricket to promote the sale. Photo Credits: Twitter/Flipkart.

A report by RedSeer Consulting states that overall online retail sales surged to over $ 2.3 billion (approx. Rs. 15,000 crore), 60% higher than the last year.

The five-day event, which included Flipkart’s Big Billion Days and Amazon’s The Great Indian Shopping Festival, was similar in size and scope to global shopping events like China’s Singles Day and the Cyber Monday in United States. The Amazon festival ran for an extra day, still Flipkart claimed 70% market share in the sale.

Flipkart claimed 85 per cent share in the fashion category of the online market. This isn’t surprising since Flipkart owns Myntra and Jabong, two of the biggest players in online fashion. Though online sales are dominated by electronics, especially smartphones, fashion and home appliances are an emerging category.

According to a report by RedSeer Consulting, sales of large appliances online have doubled between 2015 and 2017 from $430 million to $900 million. The category’s online sale is now expected to grow at 33% per year and reach $1.2 billion by the end of 2018, as reported by Livemint.

Though Amazon did not reveal sales figures, it noted that more than 82% of new customers who shopped online on its website were from smaller towns & cities. This reflects wider and deeper penetration of internet access and digital literacy in India. It also stated that customers from 99% of India’s serviceable pin-codes had placed an order during the sale.

Amazon's Hindi Website which was launched recently, saw 2.4 times new customers coming and shopping on the platform as compared to a non-sales day. This positive trend points towards the untapped potential of making the internet linguistically democratic.