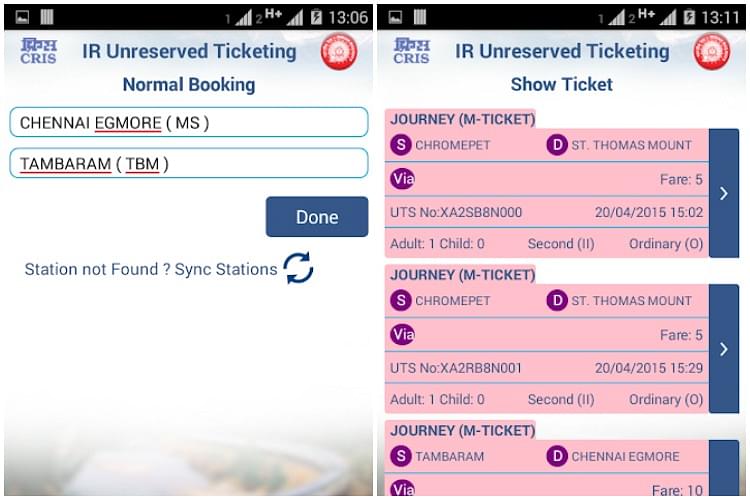 Screenshots of the UTS app (CRIS via Google Play)

Looking to get passengers to ditch paper tickets in favour of digital tickets, Indian Railways is now offering a 5 per cent bonus on recharges made to its R-Wallet that is used on the UTS app to book railway tickets.

The Unreserved Ticketing System (UTS) app was developed by the Centre for Railway Information Systems (CRIS) of the Indian Railways to buy unreserved tickets and tickets on suburban networks such as Hyderabad, Mumbai and Chennai.

With UTS, passengers can set up their R-Wallets and recharge it online using credit cards, debit cards, and netbanking. Once the wallet is set up, they can buy tickets either using their phone’s GPS, by scanning a Quick Response (QR) Code at the station or booking the ticket and using a reference number to take a printout with an automatic ticket vending machine (ATVM) at the station. The app also allows users to store their season passes on it. If asked by authorities passengers only need to show the ticket on the app.

In a bid to promote the app, the Railways is now offering a 5 per cent cashback on all recharges made to the R-Wallet. Thus, if a user adds Rs 100, they receive Rs 105 in their account.

A press release from Southern Railways says that around 3 per cent of all unreserved tickets are app-based.