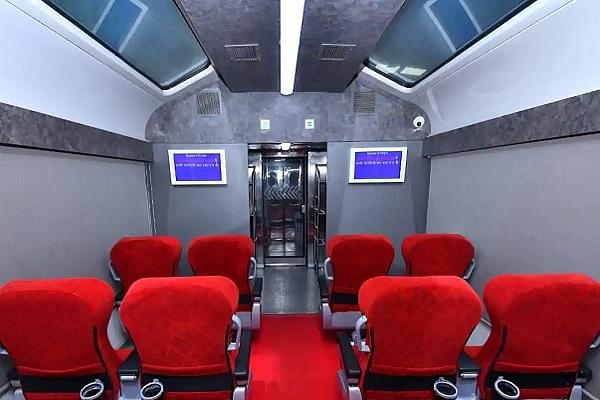 The Indian Railways has unveiled new state-of-the art luxury Vistadome coaches which are capable of running at speeds up to 180 kmph, which will be used on tourist routes, Livemint has reported.

The coaches have successfully completed 180 kmph oscillation trials and squeeze tests. They have been manufactured by the Integral Coach Factory (ICF) in Chennai.

These coaches are equipped with a large glass roof, large windows, an observation lounge and rotatable seats for an optimal experience for tourists.

The glasses have been coated with a laminated sheet to make it shatter proof.

Each coach will have 44 seats, with features like 180 degree rotation and plush upholstery. The passengers will also be able to avail the facility of an onboard WiFi information system.

Here are two other photographs of these coaches.

The usage of these coaches would be reserved for scenic tourist spots. The older versions of these coaches are currently being used by Darjeeling Himalayan Railway, Kalka Shimla Railway, Kangra Valley Railway, Matheran Hill Railway and Nilgiri Mountain Railway.